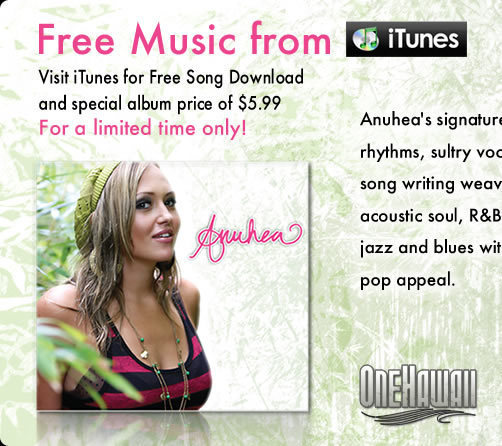 Anuhea performs live a Tiki's Grill & Bar from time to time when she is not traveling. Her next Tiki's appearance is this Saturday, May 30, 2009 at 5pm -7pm at Tiki's!

You can download "Right Love, Wrong Time" free on iTunes for a limited time. Hope you enjoy! http://www.itunes.com/anuhea

She album will also be on sale for $5.99 (also for a limited time)!!! Make sure to tell your friends and family to check it out!!

Rylee Anuheake'alaokalokelani Jenkins (Anuhea) was born in 1985 on the island of Maui. Music has been in Anuhea's family for generations, so it was inevitable that her seeded passions would reflect the same. Anuhea's father is from the North Shore of Oahu in the surfing culture of Haleiwa. His younger sister, Nalani is part of the award winning contemporary Hawaiian music trio, Na Leo Pilimehana. Anohea's mother, an Oregon native, comes from a musical family as well... her father is a jazz and blues guitarist. A self-taught guitarist and song writer, Anuhea began showcasing her talents while boarding at Kamehameha Schools in Honolulu. ''I started writing songs... I was discovering my talent and passion while discovering how to deal with emotions every teenager has to go through." Anuhea excelled in the spotlight. She was the head anchor for the daily campus-wide news, hosted a variety of TV shows for OCI6, and acted in school musicals. Her web site is: http://www.anuheajams.com/index.asp