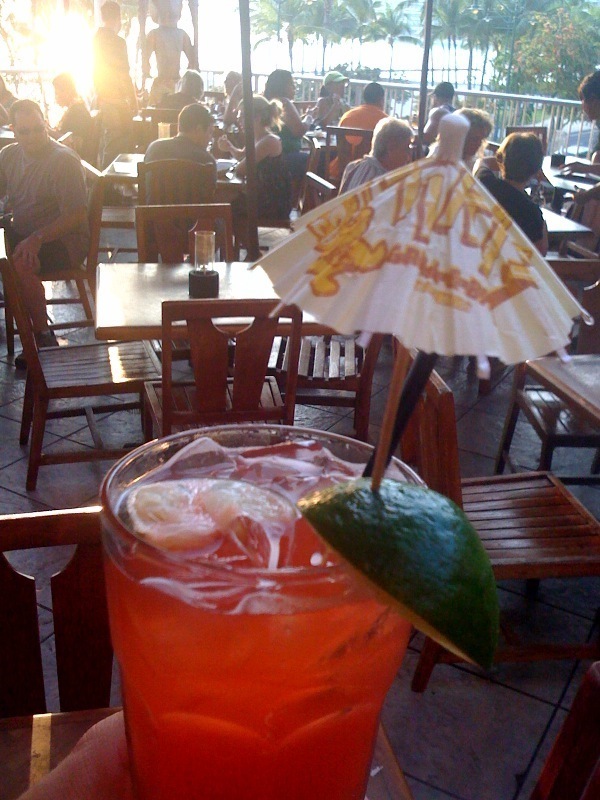 At Tiki's Grill & Bar  @tikisgrill we have some big time aloha for our friends on Twitter.

So we created a drink called the "Tweet-up The Drink!" Only me @MahaloMichael and the Bartenders know about it so far......  It's so new the cocktailers and managers don't even know about it yet.  I have created a secret key that is located on the second page of the Champagne screen on our POS. (Just in case the our staff says "I don't know what your talking about".) I have asked the bartenders to use my stash of Tommy Bahama Rum while supplies last. I just ordered some other rums to try out with this drink.  It's on special till May 20th and for a limited time afterward for $4. You must order it with a twitter device! Cell phone, PDA, Laptop, Desktops are fine too.
It will always be on special if someone wants to plan a Tweet-up! You can DM me @MahaloMichael and I can set things up! Here is some more info on what a Tweet-up is:tweetup
n. A real world meeting between two or more people who know each other through the online Twitter service. Earliest Citation:
This is a blog entry that was inspired by a face-to-face meeting between two bloggers who connected via Twitter. What would you call that? A Twittermeet? A Tweetup? Cast your vote in the comment section.
—Scott Monty, "Be the Ball, Danny," The Social Media Marketing Blog, March 21, 2007Notes:
I added microblogging ("posting short thoughts and ideas to a personal blog, particularly by using instant messaging software or a cell phone") about a year ago (June 7, 2007). Then, as now, the major buzz in the microblogging space (as the venture capitalists would say) centers around Twitter, a site that combines social networking and microblogging. (Thank your deity of choice that they didn't stick with the original name: twttr.) Twitter operates by periodically asking members a simple question: "What are you doing?" Members respond via instant messaging, short message service (SMS), third-party programs, or the Twitter site with text-based posts — called tweets — no more than 140 characters long. (When Twitter won an award at the 2007 South by Southwest festival, their acceptance speech was apropos: "We'd like to thank you in 140 characters or less. And we just did!") If you'd like to follow Word Spy on Twitter, see twitter.com/wordspy. And now it's a name of a Drink! "Tweet-up The Drink!" Rum, Pineapple & Banana Liqueur, Cranberry & Pineapple Juice, fresh limes, Tiki Umbrella!