Scanlan and I just wanted to thank you so much for looking after our wedding reception last night. You guys not only made this very easy to organize from Australia but the day leading up to the night was without a doubt one of the best we and our friends and family have ever experienced thanks to the help of both of you and the Tiki Staff. ( Note it was  Kelly & Lerina )
All set for the wedding party. Ocean Room Lanai one long table set for 20 guests. Sunflowers and Plumerias down the center of the table. Maui Buffet. #tikisgrill @tikisgrill #oceanroom #tikisoceanroom #hawaii #waikiki #largeparty #weddingreception #pauhana from mahalomichael

All of our guests cannot stop raving about the delicious food, awesome drinks, picturesque location and the two tiki staff girls who looked after us all night. 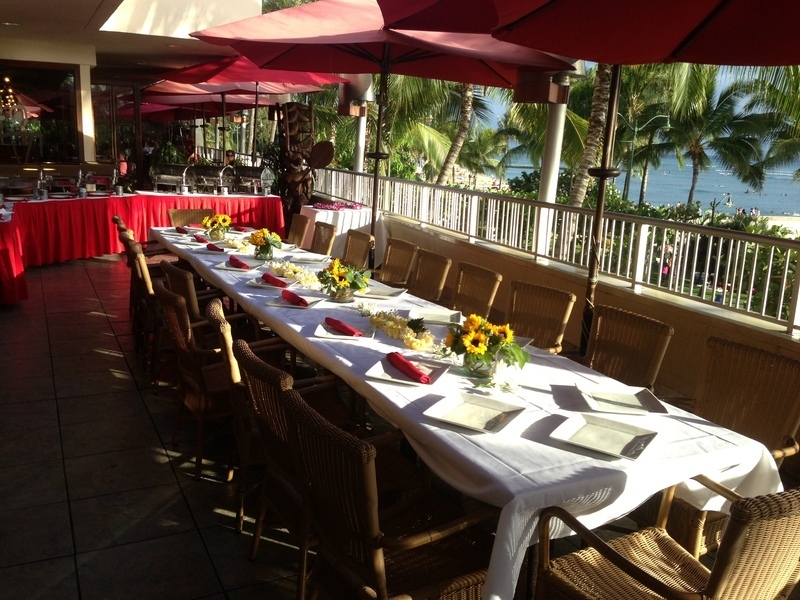 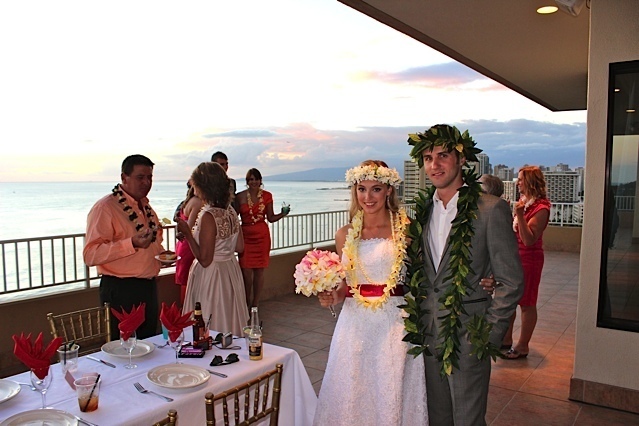 MeTV Launch Party Blog Post by By Diane Seo all photos and text are from her full blog post with more photos at http://www.nonstophonolulu.com/stories/metv-launch-party/

Hawaii’s newest TV station — MeTV Hawaii — celebrated its launch with a gathering Thursday evening at Tiki’s Grill & Bar. The KITV station officially launched on Monday on Oceanic Digital Cable 126 and over the air on 4.2. November 18, 2011

MeTV Hawaii is aiming for a retro-hip vibe that revisits what many consider Hawaii’s golden age of TV. The channel features classic TV shows from the ’50s, ’60s and ’70s, including “M*A*S*H,” “Cheers”, “Perry Mason,” “The Mary Tyler Moore Show,” “The Beverly Hillbillies,” “The Twilight Zone,” “Batman,” the original “Star Trek,” “The Brady Bunch” and more. During commercial breaks, they’ll be classic local vignettes, sourced from KITV’s archives. For a full schedule, visit kitv.com/MeTV or go to MeTVHawaii on Facebook.

Guests at Thursday’s celebration, including KITV President Andrew Jackson and morning anchor Mahealani Richardson, enjoyed pupu and drinks, as well as a performance by the local funk and jazz band, Quadraphonix.

It was great to meet Honolulu Pulse Food blogger Lindsay Muraoka, the text and great photos bellow all came from her. You can find more at http://www.honolulupulse.com/category/blogs/food-la-la

BY LINDSEY MURAOKA / Special to the Star-Advertiser

Tiki’s Grill and Bar celebrated their ninth anniversary this week with a party filled with food, fun, and lots of drinks. It took place at their bar and lanai area overlooking a beautiful view of the sunset and beach. There was live music by Vaihi and Tahiti Rey.

I knew this was going to be a great party the moment I walked in and was greeted by a lovely tray of drinks.

I chose their signature Mai Tai. Sweet and scrumptious!

Me and Yen Phan.

There was so much food I didn’t get a chance to eat it all.

The seared tofu wrapped with shiso was flavorful and refreshing.

There was kalbi, kimchee and other vegetables to make your own Korean-style lettuce wraps.

Ahi tartare with truffle oil was amazing! The ahi was so soft and just melted with every bite. Words can’t even explain — just imagine fireworks of happiness and excitement in your mouth. I ate four of them and my friend Cory Mitsui ate six.

These smoked pork spoons were full of savory flavor. I thought those yellow balls were cherry tomatoes but they turned out to be a sweet fruit that bursts in your mouth. Can anyone tell me the name of the fruit? I tried to Google for it but no luck.

The only disappointing dish was the truffle garlic edamame. It sounded delicious but it was overcooked and mushy.

Korean glazed chicken wings were nice and spicy! The cilantro added a refreshing and strong kick of flavor.

These baby back ribs with guava glaze were sweet, savory, and lip smacking fun to eat.

The fried crab sandwich was awesome. This picture explains it all.

Michael Miller, center, is Tiki’s Director of Sales and Marketing.

———
Lindsey Muraoka blogs about food and drink for the Pulse. Contact her on Twitter or via email at foodlalablog@gmail.com.

© 2011 The Honolulu Star-Advertiser. All rights reserved.

Michael, Tiare &  the Tiki's Event Team got this wonderful handwritten thank you note from Josh & Annalise.  The Seattle couple had planed their dream destination wedding back in February. Having a intimate wedding reception of 25 guests, on the Ocean Room Lanai.

For this setup we closed the Ocean Room lanai doors and build a long table, allowing space on the ocean side of the lanai for two high tops for cocktails and relaxing before sitting down for dinner.  We set the base table with white linen and the bride bought in her own custom color table runner and napkins. Glass vases filled with sand and shell and a candle also decorated the wedding parties table.

Tiki's Grill & Bar was proud to accept the:

The winning restaurants were announced at a gala reception held November 7 at the Royal Hawaiian's Monarch Ballroom.

In 1984, HONOLULU Magazine established its Hale Aina Awards as the Islands’ first local restaurant awards. Before then, culinary awards in the Islands had been given by Mainland travel interests. The Hale Aina Awards were the first to recognize local tastes.

This was great wedding vow renewal in the coconut club. Kelly and Thao did everything first class from the flowers, extra decor, lighting, menu and bar.

The photos bellow are from a rehearsal / welcome to Hawaii party for a destination wedding. The he is from the east coast and she is from Japan. It was a great east meets west party with bilingual name tags.

Destination weddings are becoming increasingly popular in the United States. Destination weddings, or "wedding aways" and "weddingmoons", allow the couple to completely design their wedding ceremony to fit the location. From beach weddings to weddings in Hawaii or New York City, many Americans are choosing to marry at a location far from home. The options for destinations are limitless[19].

Examples of creative locations for wedding include nature parks, aquariums, baseball stadiums, golf courses, zoos, and theme parks. Receptions can also be held at creative, nontraditional locations such as on a boat, in a mansion or castle, historical monument, winery, or museum[19]. 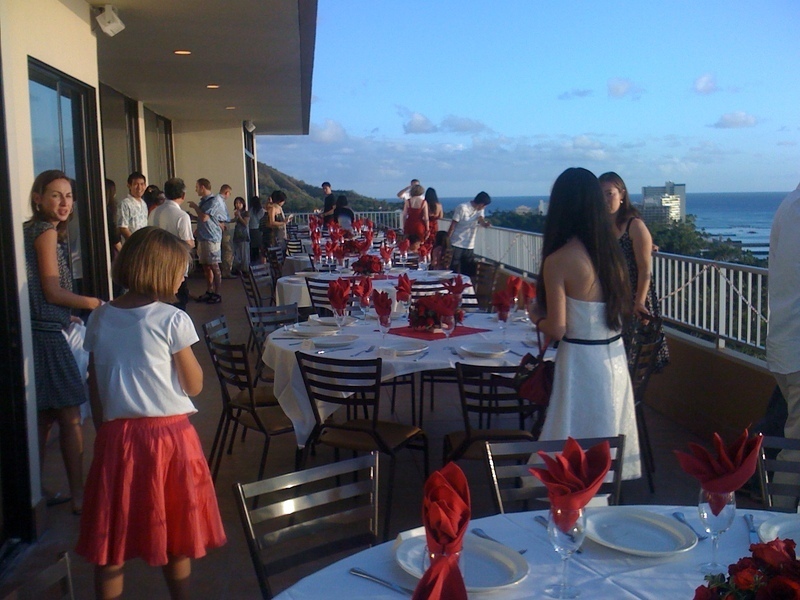 Tiki's Grill & Bar  served The University of California Women Volleyball Team. They came in for there pre-game team meal. The team was dressed and ready to play. We were able to have their pre-ordered menu items on the table in 15 minutes. After Lunch the were headed to the Stan Sheriff Center to get ready to play.  Mahalo to Jennifer Carey! 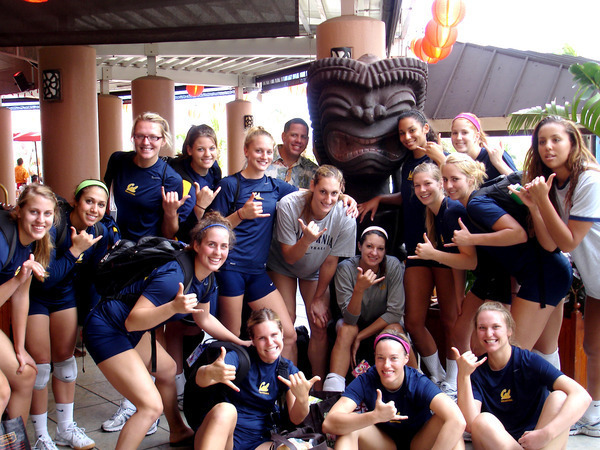 Bellow is Jennifer Carey. Carey, a former award-winning standout setter at the University of Hawai'i at Manoa. She is now the Director of Volleyball Operations for the Bears. It's always great to see another student athlete move up in a field that they love. 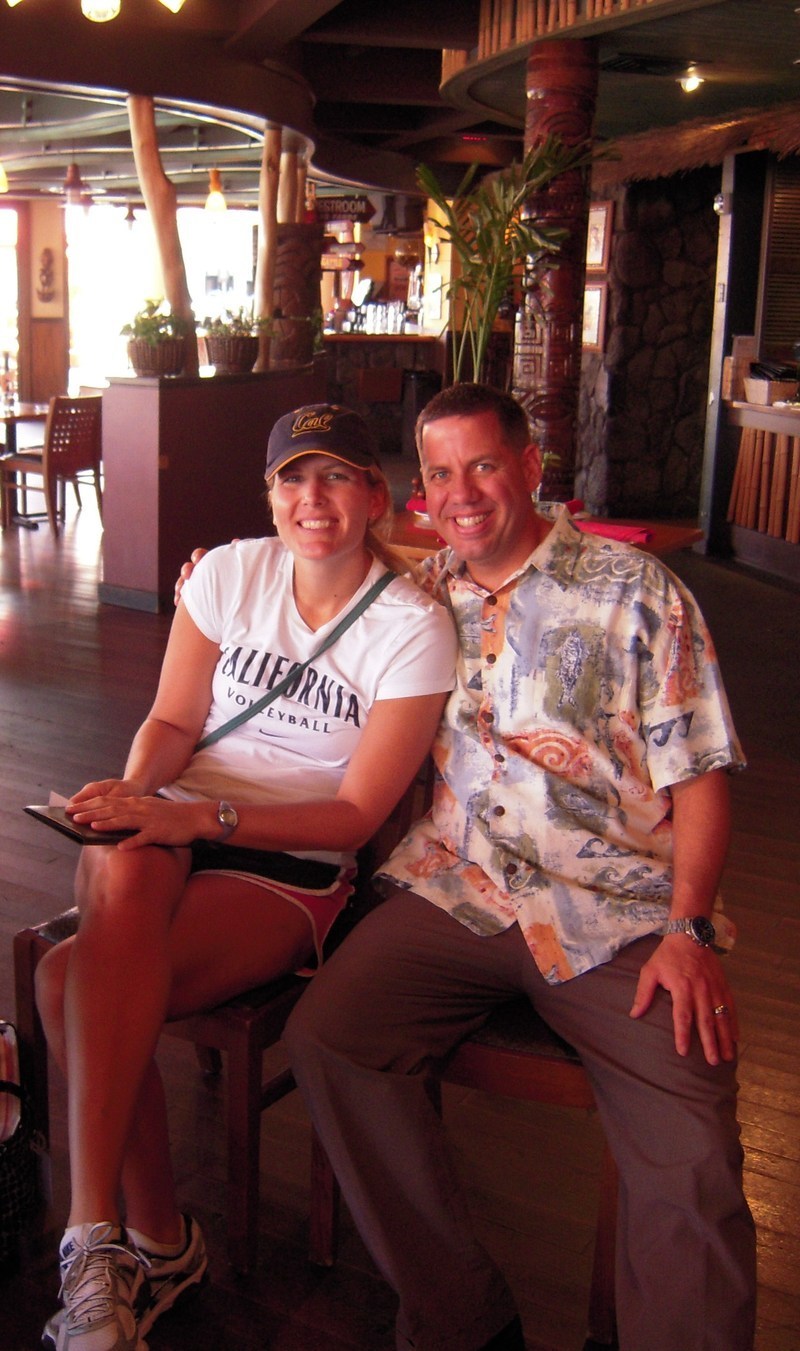 In 1999, Carey was the starting setter for the Rainbow Wahine as a freshman where she earned All-Western Athletic Conference second-team honors. She helped lead Hawai'i to a 29-2 record, an NCAA regional semifinal appearance and a No. 8 AVCA final ranking in her first season. In her four-year career, Carey took the Rainbow Wahine to two NCAA national semifinal appearances, two No. 3 rankings, and a 123-12 record. She earned All-WAC second team honors three times and finished her career ranked fourth all-time for Hawai'i with 3,540 assists. Carey was also selected to the WAC All-Academic team in each of her four years with the Rainbow Wahine.

Carey's first collegiate match was a 3-0 (15-8, 15-7, 15-5) win against Cal on Sept. 1, 1999, at the Recreational Sports Facility in Berkeley, Calif. She had 33 assists to go along with 12 digs and three kills on five attacks. The match was also the first at Cal for head coach Rich Feller and assistant coach Chris Bigelow.

Carey graduated from Hawai'i with a degree in business administration in marketing in 2003. She then worked as a sales and marketing executive for KHNL and K5 Television in Honolulu before leaving the islands to play professionally in the fall of 2004 with Brandenburg VCO in Berlin, Germany. Carey currently resides in Oakland, Calif.

To check out the menu for the team - They ordered off the Pono Menu.
http://www.scribd.com/doc/18225884/2009-Set-Menus-2009-Tikis-Grill-Bar
Jennifer made me switch the guava cheese cake to plates of fresh fruit.