We are having a great time with everyone that is here for the 1st Oahu Tweeps Tweet Up!
Shots were taken by tweeps with camera phones. It's hard to pick who wins! Mahalo Nui Loa to everyone that has show up!,Michael C. Miller
Director of Sales & Marketing
Tiki's Grill & Bar808-923-Tiki (8454)
808-922-5883 - FAX
MichaelM@tikisgrill.com
www.TikisGrill.comhttp://twitter.com/mahalomichael
http://www.facebook.com/people/Michael-Tikis-Miller/652778197
http://www.linkedin.com/in/mahalo 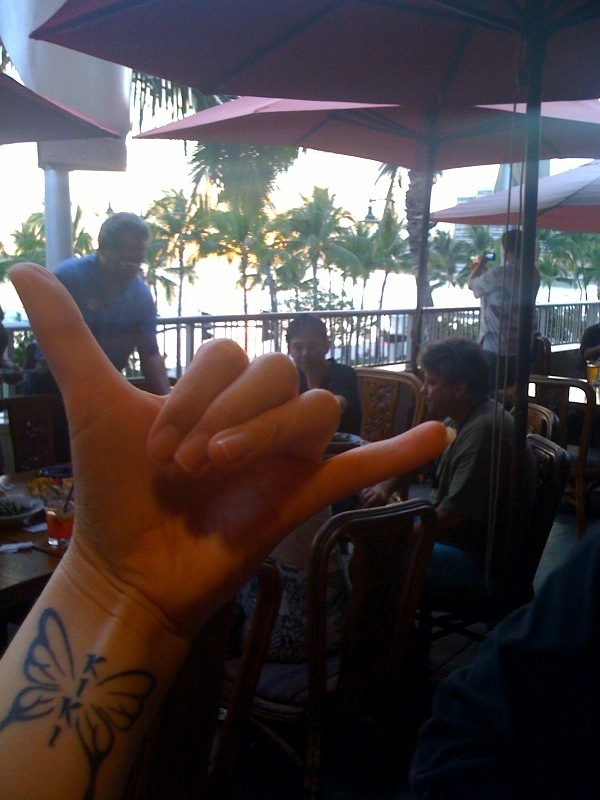 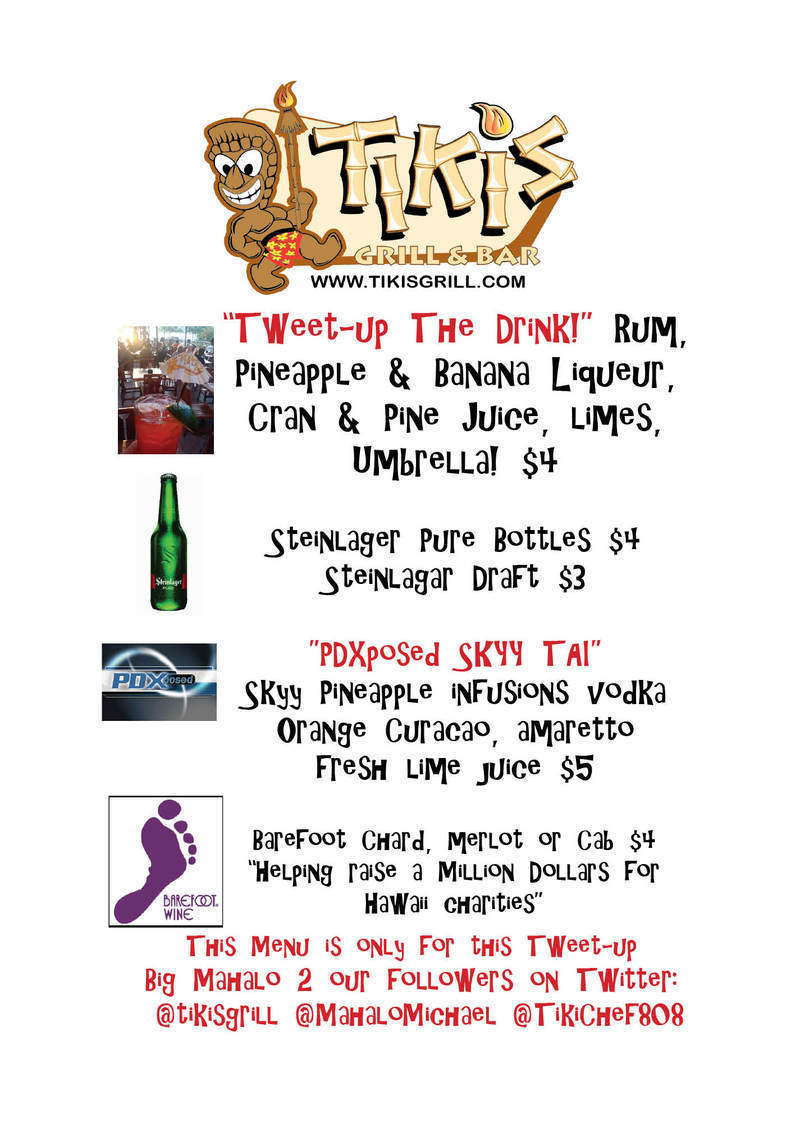 It took a while to get this menu done.

I don't recommend tasting and using InDesign at the same time.

EVERYONE is welcome! Visiting the island? Come meet the locals!

Stay after the Tweet Up and enjoy Pink Tiki Night!

Mahalo to Michael of Tikis for graciously supporting the local Twitter community.

Oahu Tweeps is founded by Kelly Mitchell and Arleen Anderson for the purpose of promoting our local community of Twitter islanders.

Tweet Ups are play time! This is a place to make new friends, connect with known friends, and have fun!

Do you have an idea where next month's Oahu Tweeps Tweet Up should be? 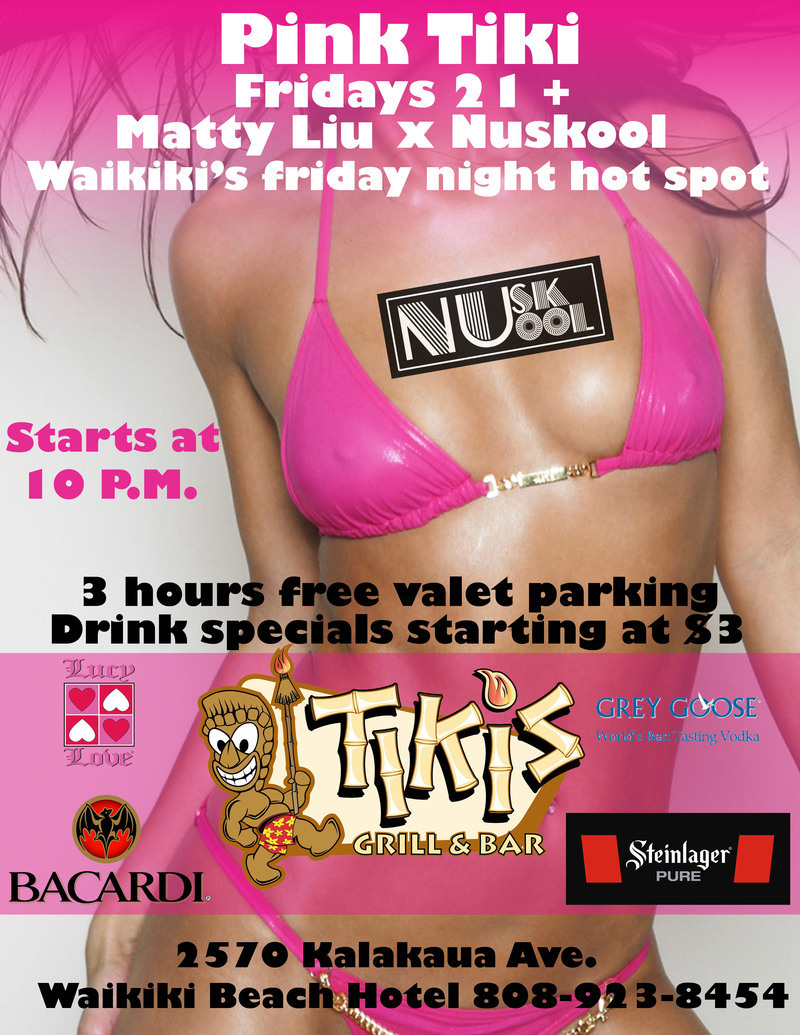 New Pink Tiki Partners and Poster. It might be too hot....too many photo shoots in a week!

Today we hosted Hawaii Web TV. They came in to Tiki's Grill & Bar and  filmed the decor, views, tropical drinks and food.

You can check their web site. www.Hawaii-webtv.com

It’s a visual information site on the web, like watching TV from Hawaii．They have a strong connection with Japanese Media. 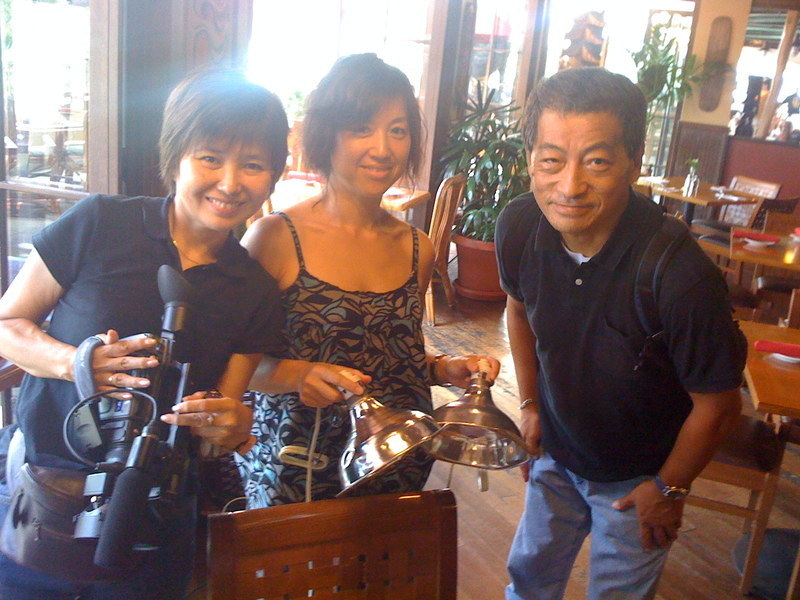 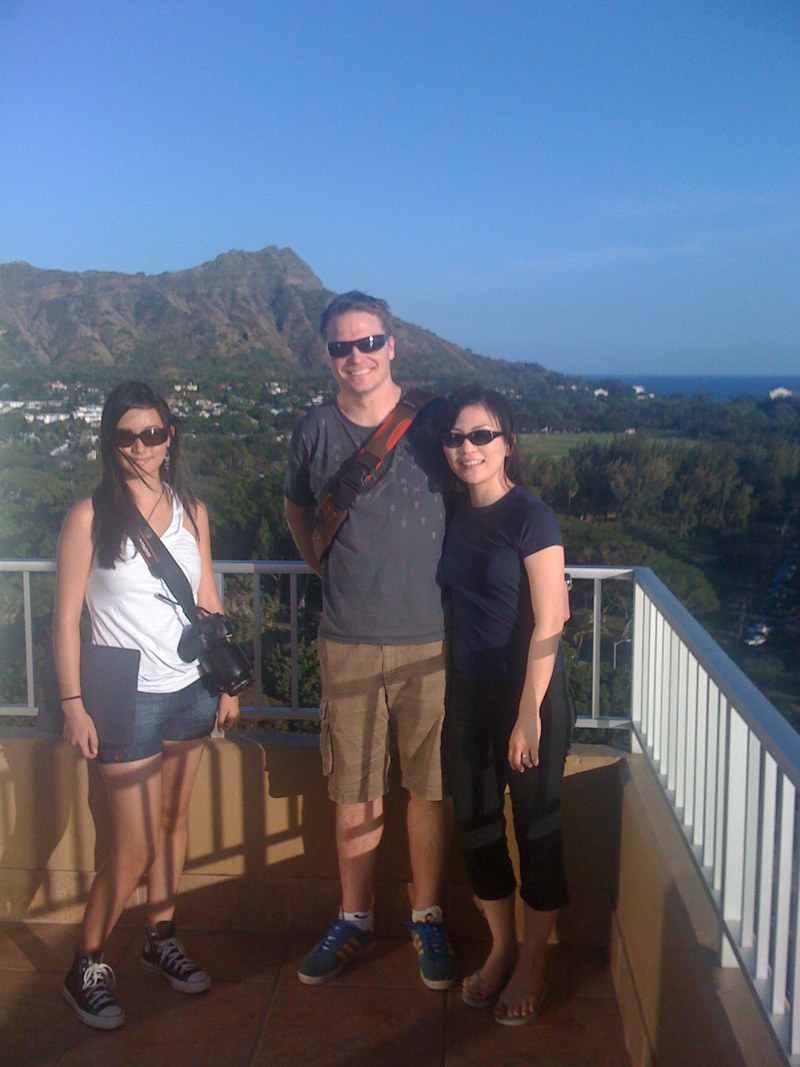 Today, I met with a wonderful couple that is getting married on Friday and will be having their party in our Coconut Club on the 21st floor.  I also got to meet Dallas Nagata who will be shooting their wedding and party. She is the one with the camera in the photo!

You can check out some of her work at  Photography by Dallas Nagata - Flickr.Com

She has been serious about photography ever since her freshman year of college in 2004. After taking the introductory darkroom photography course,  she was hooked, and soon after received her first Digital SLR camera, a Canon Digital Rebel, for Christmas in 2004. She quickly learned that my photographic interests lie dominantly in portraiture, and she has never looked back. While she photograph every subject possible, from skyscapes to animals, her passion will always be photographing people, attempting to capture their essence in a visual image.If you like her work she can be found at http://dallasnagata.com
via slideshare.net
I'm looking forward speaking in front of the National Association of Catering Executives (NACE) tonight at Formaggio Grill in Kailua.  Monthly Meeting for Caterers and Event Professional to meet, network, and enjoy good food/beverage. This month learning journey is "How To Teach Your GORRILLA on How To Use Tweeter & Not Loose Friends" and the speakers for this event is Michael Miller Tiki's Grill & Bar Director of Sales and Marketing and Dusty Grable Manager of Formaggio Grill.

A great video from our friends at NASA & PBS. We know many of you will not be able to attend this week’s Taco Tiki Tuesday. Tom and The Crew from Tiki’s Grill & Bar will tip our glasses towards the stars as a salute. You have your job too do and so do we!
5pm today - Tiki Taco Tuesday at Tiki's! $2 Tacos! $3 Drink Specials! Live Music, free valet parking! The sun is shining in Waikiki today!

Here are some photos of the deck and post and pier system. Once we started we found wood rot and lots of damage. Alex is my brother that flew in from Puna to do most of the work. I'm the helper.

Most experts agree that the average life expectancy of a wood deck is 10 to 15 years. It is estimated that there are millions of decks in the U.S. that are beyond their useful life and may be unsafe. In fact, the number of deck collapses has increased in recent years. From 2001 to 2006, there have been nearly 350 reported injuries and 17 deaths as a result of deck failures.

As we work on the sections we evaluate its construction to make sure it's structurally sound and safe. Using the proper structural connectors and fasteners (like nails and screws) as well as regular maintenance are the keys to a safe, strong deck.

We are using hanger and other products from Simpson.

Simpson Strong-Tie - structural connectors, shearwalls, anchors, fastening systems, and seismic testing for stronger and safer wood and steel construction.
1. Ledger Attachment
The ledger connection, where the deck connects to the house, is the most common failure point on a poorly built deck. It's very important to use lag screws (SDS) or through-bolts rather than nails to secure your deck to the ledger board.
2. Joist-to-Ledger
The floor joists intersect into a beam or ledger board and must be properly secured.
3. Joist-to-Beam
The beams must be secured to the joists that support the floor of the deck.
4. Beam-to-Post
The post must be properly connected to the beams underneath the deck.
5. Railing Post-to-Deck Framing
People often get injured due to weak or wobbly railings on a deck. The railing must be properly attached to the perimeter of the deck as well as the floor joists running underneath the deck.
6.Stair Stringer-to-Deck Framing
The stair stringers that run along each of the stair steps (or treads) must be secured to the deck framing.
7. Stair Tread-to-Stringer
Each stair step (or tread) must be tied to the stair stringers.
8. Post-to-Concrete
Post bases are used to connect the post to the footing or concrete slab underneath your deck.

As you evaluate the safety and construction of your new or existing deck, knowing these simple steps will help to ensure your deck is structurally sound and properly maintained.

1. Check Out Your Deck
The first step in making your deck safe is knowing that it may not be. Decks are potentially the most dangerous part of the house, according to some experts. Factors, such as improper construction, exposure to the elements and lack of maintenance can make your deck unsafe. It's important to look for the warning signs: missing or loose connections, corrosion, rot and cracks. If you are unsure about the safety of your deck, consult with a professional such as a structural engineer or contractor.
2. Carry the Weight
For most homeowners, the deck is a popular gathering place for friends and family. Like a house, a deck must be designed to support the weight of people and objects placed on it as well as the forces of Mother Nature like wind, snow and earthquakes. Knowing how weight and other forces can affect the safety of your deck is important. There are three types of forces that put pressure on your deck, causing strain to the critical connections that keep it together:
3. Create a Path
A continuous load path, that is. A continuous load path is a method of construction that creates a series of solid connections within the structure of the deck that transfers load through its frame to the ground and adjacent support structure (commonly your home). If your deck is built with a continuous load path, it will be better equipped to resist the forces that can weaken your deck.
4. Combat Corrosion
Decks and the metal connectors that keep them connected and safe are exposed to the elements. Over time, metal connectors, screws and nails can corrode and weaken the structure of your deck, especially if the right product is not used. If you live in an area prone to moisture, such as along the coast or near bodies of water, the risk of corrosion is much higher. Chemicals in pressure-treated woods and other corrosive elements can also damage your deck. Using connectors, screws and nails that are made from stainless steel is the best way to combat corrosion. When choosing connectors, take into account where you live and how weather and the environment may affect your deck. For critical information about corrosion and connector selection, click here.
5. Maintain a Safe Deck
Just like other parts of your home, regular maintenance and inspection are required. To prolong the life of your deck, you need to check for things like loose boards or protruding nails. You should also keep your deck clean from debris and depending on type of deck boards used, keep them sealed to protect against water and sun damage. 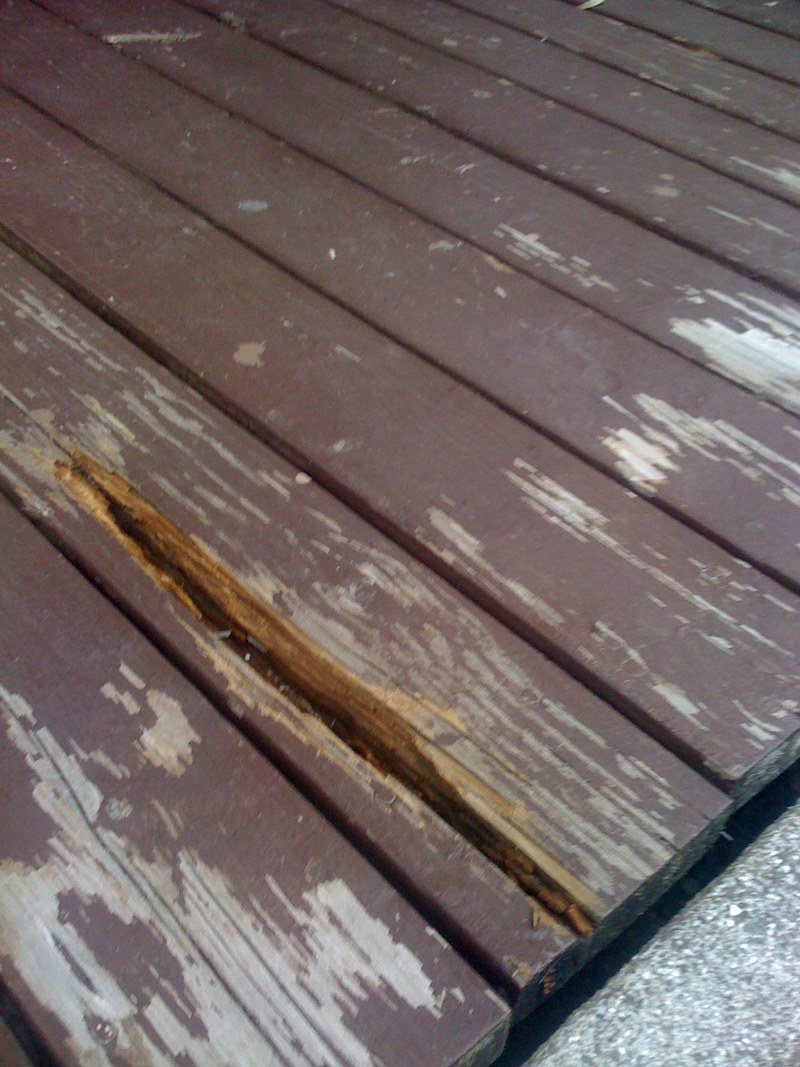 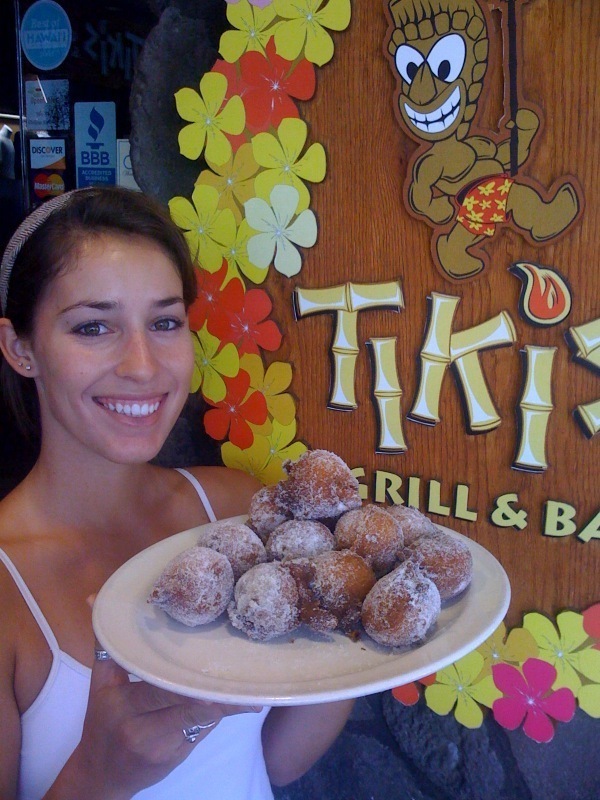 I over heard one of our waiters ask Chef "Kapo" Kapolanialaimaka Kealoha. "What is a Andagi?" so he made a few up to try before Mother's Day. I only took two, but now I want to see if there are any more left. I love my job!


Sātā andāgī (サ�タ�アンダ�ギ�) are sweet deep fried buns of dough similar to doughnuts, native to Okinawa. They are also popular in Hawaii, sometimes known there simply as andagi. Traditional Okinawan andagi is make by mixing flour, sugar and eggs. The ingredients are mixed into a ball and deep fried.

Sata andagi are a part of Okinawan cuisine. Like most confectioneries from the Ryukyu Islands, the techniques for making them are descended from a combination of Chinese and Japanese[1], although other sources say it simply is a derivative of a Chinese dish. They are typically prepared so that the outside is crispy and browned while the inside is light and cake-like.

Retrieved from "http://en.wikipedia.org/wiki/Sata_andagi" --From Wikipedia, the free encyclopedia