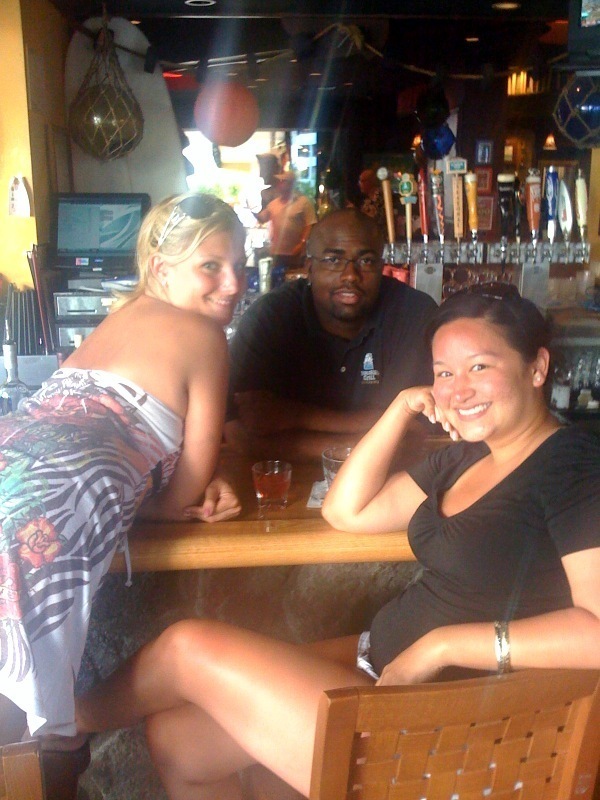 Honolulu -- One of the largest and longest running amateur surfing competitions in the State of Hawaii cooked up a hot, windless Memorial Day as Air Force jets flew overhead at the Ala Moana Bowl.

Hunter Lewis, Kipa  and Tiare Friedman
Photo by Micheal Miller   http://mahalomichael.posterous.com/Hunter Lewis (Dude in Photo) and Tiare Friedman (Lady in Photo) both competed with 240 plus contestants in surfing. Both competed in long boarding heaps. With three to four foot faces, competitors made the most of what the surf has to offer as Kona-winds gave push to the formidable lefts that hit the shallow reef along with the slow incoming tide.Hunter is a Tiki's bartender and can be found behind the bar most week days. Tiare is the Sales and Events Coordinator at Tiki's Grill & Bar, she is also a team rider and model for Honolua Surf Company. 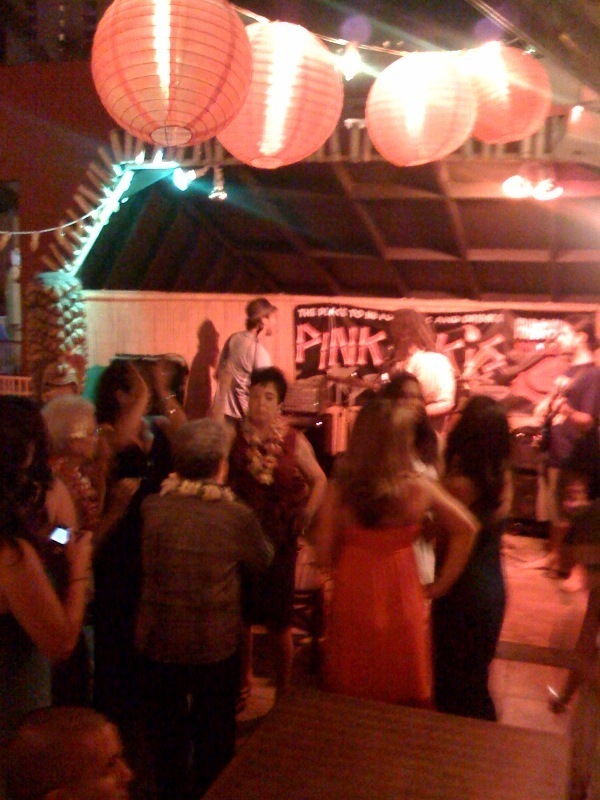 The Kaneohe Yacht club was organized on October 28, 1924, with the
original Club site on the western side of Kaneohe Bay. Opening
ceremonies at the present site were held on December 17, 1955. Kaneohe
Yacht Club is the oldest Yacht Club in Hawaii, in terms of continuous
service 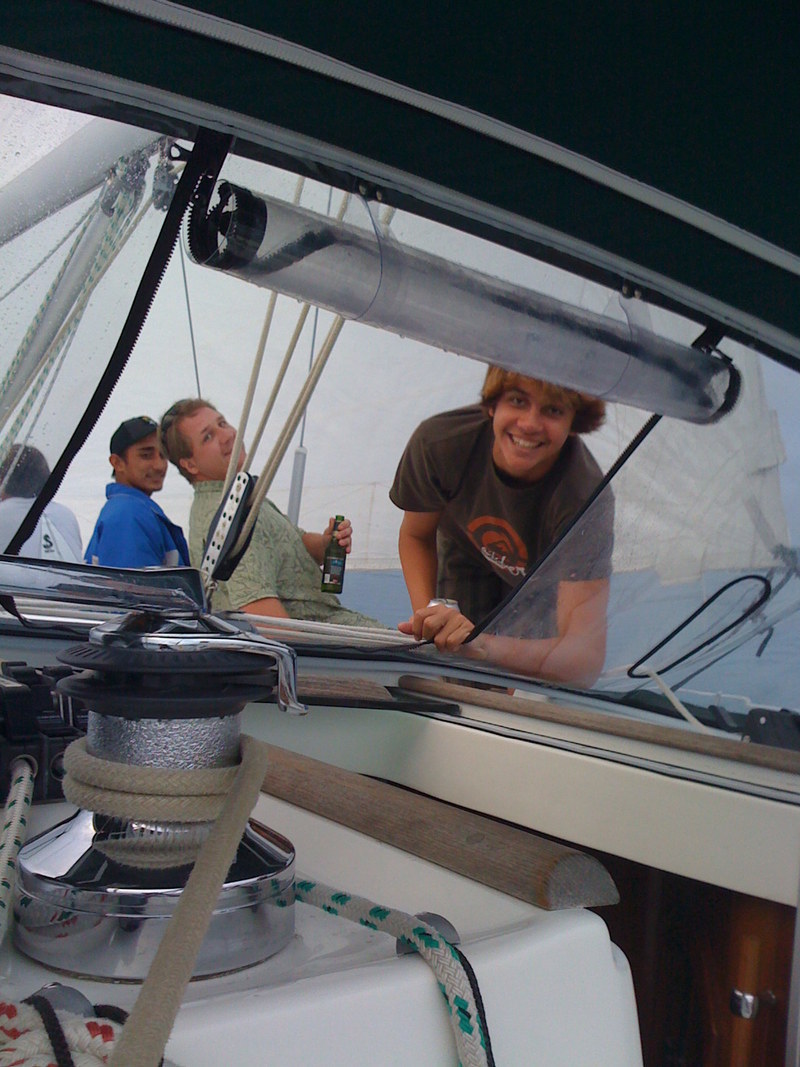 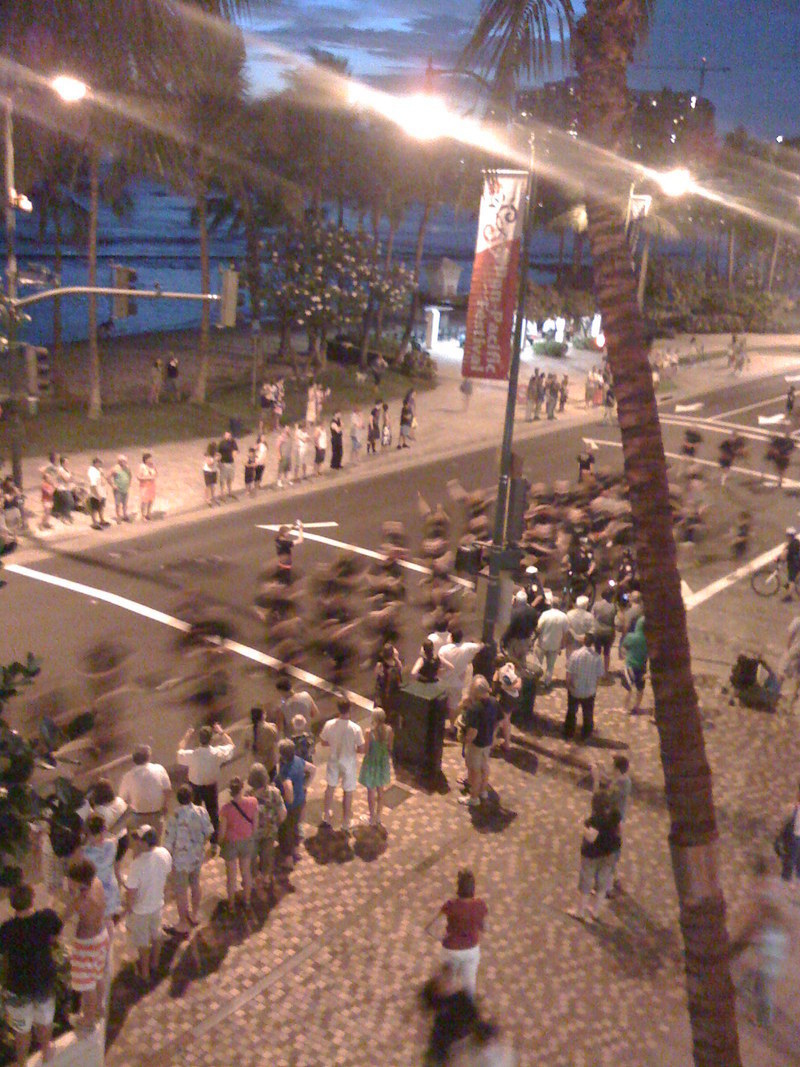 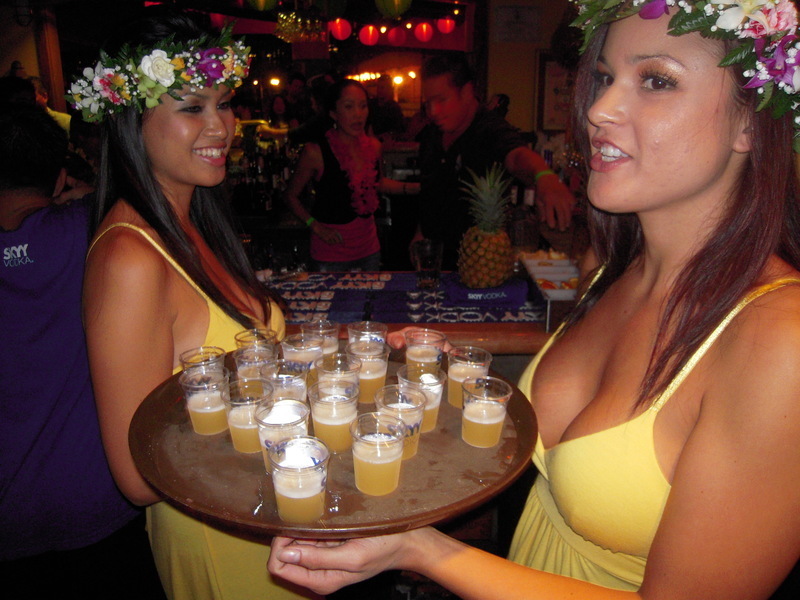 Download Fun_Night_Open_Mike_and_Skyy_N.wmv
http://www.mtv.com/ontv/dyn/dance_crew/crews.jhtml?crew=super_crew
Mahalo guys for stopping into Tiki's! Looking forward to seeing ya at Pink Tiki on Friday after 10pm. VIP table? 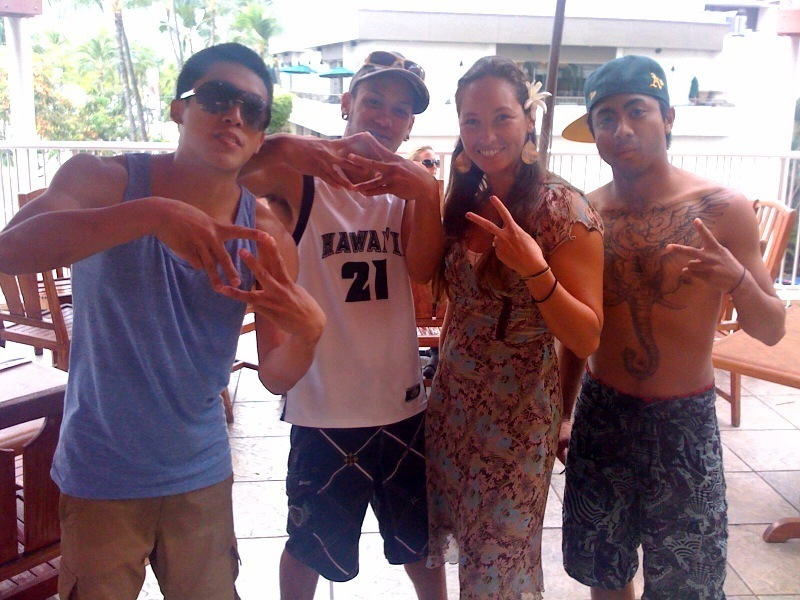 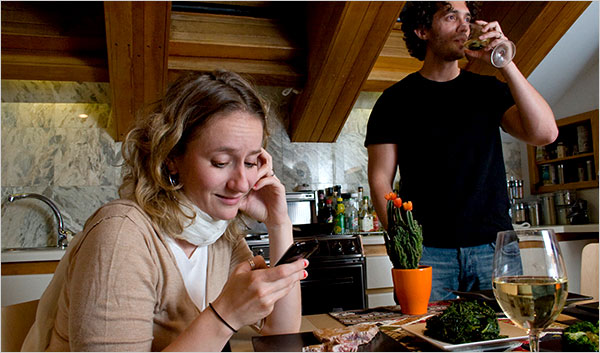 DINNER CAN WAIT Danah Boyd and Gilad Lotan at their home in Boston.

ANYTIME Anne Fishel and her family talk about behaviors that are out of bounds during family meals, they come back to the Yom Kippur Incident.

"Shut the gadgets off, look each other in the eyes, relax, and trust that you are loved and appreciated, just like you did before you could access all this chatter. Et, bon appétit."

Two years ago, 14 people had gathered at her dining room table in Newton, Mass., to break the fast on the most solemn of Jewish holidays. As Dr. Fishel looked around, it seemed that everyone — her husband, their two college-age sons, Gabe and Joe, their friends — was enjoying her cooking and sharing the sense of an important family dinner.

Except, she noticed, for Gabe’s friend from college. Wait a second, what was he doing? With a furtive downward glance, he was surreptitiously texting — and not just once or twice, but almost continuously, from the apple-squash soup to the roast turkey.

Dr. Fishel, who directs the family and couples therapy program at Massachusetts General Hospital, wasn’t about to embarrass the young man. But another of Gabe’s friends, seated next to the stealth texter, spoke up. “You really shouldn’t be doing that here,” she admonished him, and not in a whisper.

“Why not?” the texter said. “It’s not like this is a formal dinner or something.”

Husbands, wives, children and dinner guests who would never be so rude as to talk on a phone at the family table seem to think it’s perfectly fine to text (or e-mail, or Twitter) while eating.

Dr. Post Senning is here to tell you that it is not perfectly fine. Not at all. So new is the problem that her latest book, “Emily Post’s Table Manners for Kids” (HarperCollins, 2009), written with Peggy Post, covered it only generally, in a blanket ruling: “Do NOT use your cell phone or any other electronic devices at the table.”

She now finds it necessary to weigh in on the texting issue specifically: No texting at the dinner table, particularly at home. “The family meal is a social event,” she said in a phone interview, “not a food ingestion event.”

“Be aware that others can see your thumbs working even when they are in your lap,” she wrote in a follow-up e-mail message, laying down the official rule of etiquette. “If you are in a situation where your attention should be focused on others, you should not be texting.” And she means no e-mailing, either.

That means you, George d’Arbeloff. Or so his wife, P. A. d’Arbeloff, told him after she caught him peeking at the iPhone in his lap during Thanksgiving dinner at their home in the Jamaica Plain neighborhood of Boston. “I tried to catch his eye,” said Ms. d’Arbeloff, director of the Cambridge Science Festival in Cambridge, Mass., “but he was looking down.”

He may have been scrolling through work-related e-mail messages or, possibly, checking sports scores, conceded Mr. d’Arbeloff, who is the chairman of a Los Angeles-based dental laser company. Because the company is on the West Coast, e-mail messages tend to flood in just as he is sitting down to eat.

“I have never texted at the dinner table,” he said in a telephone interview. “I will admit: I do read e-mails.” He paused, listening to his wife, who was in the room with him. “P. A. says I send.”

A few months ago, a family meeting was convened. The d’Arbeloffs’ 7-year-old twin daughters made their feelings known. Their father agreed to cease using his iPhone during dinner. “I’m 95 percent reformed,” he said.

“Maybe people think they can time-share: both texting and talking at once,” said Harry Lewis, a Harvard computer science professor and one of the authors of “Blown to Bits: Your Life, Liberty and Happiness After the Digital Explosion” (Addison-Wesley, 2008). Beware, he says: You’re not fooling anybody. “No one thinks someone on the cellphone can really be paying attention to another person.”

Texting while eating has become a major issue among couples in counseling, says Evan Imber-Black, a prominent family therapist. And, yes, she says, it seems the men are the ones who can’t sit down for dinner for a half-hour without tapping away at their phones. (The reverse is true among teenagers, where the girls are the nonstop texters.)

“I think it has to do with the erosion of a boundary between work and family, particularly for men in any kind of business where they’re just afraid to stop working practically 24-7,” said Dr. Imber-Black, one of the authors of the book “Rituals in Families and Family Therapy.”

Evvajean Mintz’s husband, Richard, a partner in a Boston law firm, arrives at the table with his BlackBerry clipped to his belt. “If there’s one second of spare time, and if you look away from him and lose eye contact, he immediately whips it out and starts looking at it,” she said. “I suggested I’d throw it out the window.”

Like a lot of couples, the Mintzes have conflicting views of the rate of tableside BlackBerry use. Mr. Mintz, who is working part time at 87, thought he was doing it only when his wife was preoccupied — when, for example, she ducks into another room to catch a few minutes of television.

Another family therapist, Peter Fraenkel, director of the Center for Work and Family at the Ackerman Institute for the Family in Manhattan, said he recently counseled a real estate broker and his wife, who works as a headhunter. The couple has two children, ages 6 and 4. She wanted two BlackBerry-free hours each night, including dinner.

Dr. Fraenkel said that he had the husband log his incoming e-mail messages, texts and calls for two weeks. Which ones had to be handled immediately, or else the deal would be lost?

After the husband concluded that none of the calls were urgent, Dr. Fraenkel said, he was able to create the two-hour BlackBerry-free family zone.

As for teenagers and texting, says Danah Boyd, a researcher at Microsoft who studies the ways young people use technology, they’re just doing what they’ve always done: hanging out with their friends.

The cellphone makes it possible to bring your social circle to the dinner table. “You don’t really have to disconnect,” she said.

Brigid Wright, 17, from Needham, Mass., said that like many teenagers, she has honed the skill of eating with one hand and texting with the other. But, she said (and her family confirms), she does not text at the table at home.

“No teenager wants to look up from a glowing cellphone screen to see a disappointed parent frowning across the table,” she wrote in an e-mail message.

Ms. Boyd is 31. Sometimes she looks up from her glowing iPhone screen to see her husband, Gilad Lotan, a Microsoft designer, frowning at her across the table.

“If I’m sitting there privately responding to messages, Gilad might say, ‘Hey, I thought we were at dinner,’ ” she said. “I’ll be, like, ‘Hmm, sorry, just doing this quickly.’ ”

They both bring their iPhones to the table, she said, using them as conversational tools. If they’re debating a question, for instance, they might use their phones to look up the answer.

They try to avoid texting, she said, “if it’s a dinner where we’re trying to be engaged.” (As opposed to a dinner “where we both need food in our systems so we can both get back to work.”).

There is no texting or e-mailing at the dinner table in Lydia Shire’s home, in Weston, Mass. “My son would never dream of texting at the table,” said Ms. Shire, a chef and restaurant owner in Boston. “And he wouldn’t do it at anyone else’s table, either.”

True, said her 19-year-old son, Alex Pineda. To take out his BlackBerry Dream would be to distract from his mother’s amazing cooking, and the conversation with her and his father.

But he did have to explain it to a friend who came to dinner not long ago. Just as they were sitting down at the table, Alex said, “he started texting.”

Fortunately, his mother was still occupied with serving the food. “She didn’t notice,” Alex said. “I told him to put it away.” 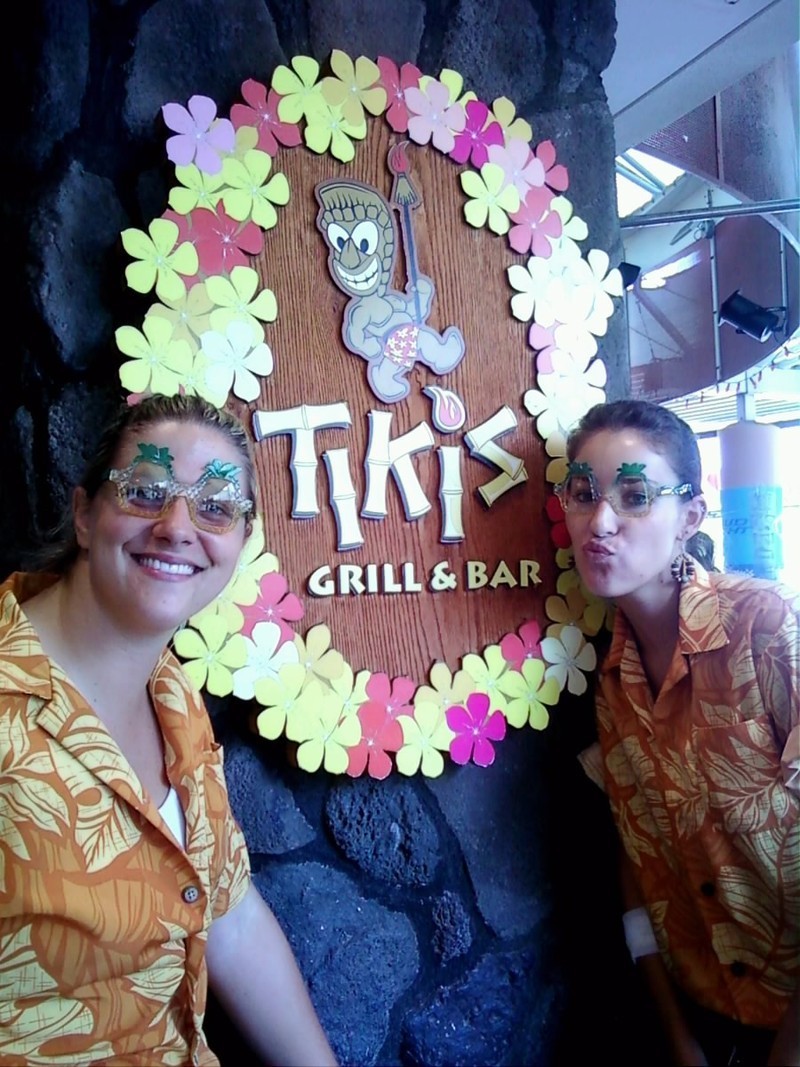 Johnny Helm is going to buy the first 100 guests a Budlight at 6pm.
Then they are on special for $2.

We look forward to seeing what the surf washes up for musical talent!