Radio Mojo offers the best of eating, drinking and living in Hawaii. Host Jo McGarry brings a Scottish accent and a love of an ever-changing culinary scene to the airwaves every Saturday morning. A show about food, wine and single malts, peppered with interviews with some of the best chefs, distillers, mixologists and winemakers in the world.

Bill Carl, of Southern Glazers Wines and Spirits waxes lyrical on some of his favorite beers of the moment; Michael Miller , Director of Operations from Tiki's Grill and Bar on community relations and Girl Scout Cookies; And we get a first look at The Brilliant Ox as it prepares for opening day - Executive Chef Brian Gremillion joins us to share some fusion pub food. 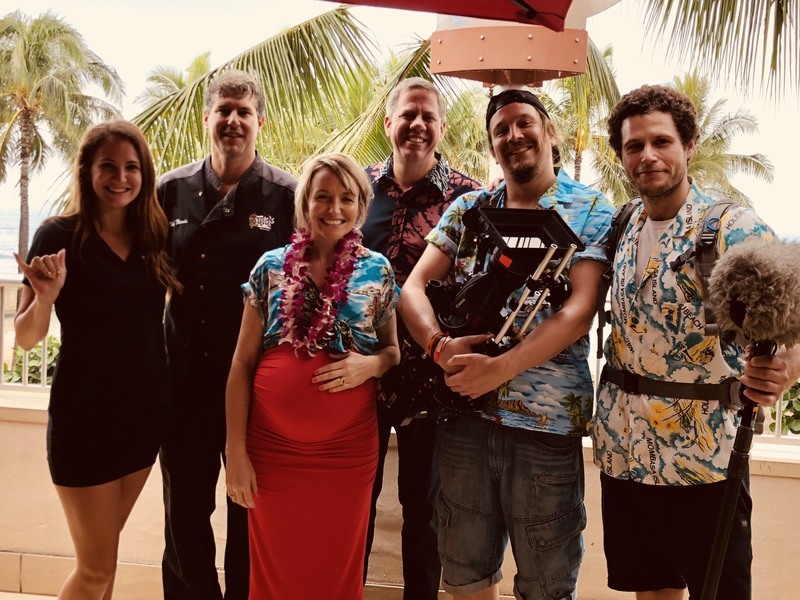 It was busy weekend of filming with the UK TV show Food Unwrapped hosted by Kate Quilton. We can't tell you what the show will be on, but it will be interesting. Her technical crew was professional and fun.

Food Unwrapped has arrived on Lifestyle FOOD. This award-winning series will change the way you think about a whole host of supermarket staples from ice cream, to yoghurt, orange juice, tinned fruit, beer, and even the ever-curious sushi seafood stick.

In the series, food investigators and intrepid reporters Matt Tebbutt, Kate Quilton, and Jimmy Doherty travel the globe to unearth the truth about mass produced food, asking hard hitting questions about things we often overlook, and the fine print on food wrappers.

To spark your own culinary inquisitiveness, here are just two pretty regular processed foods, with rather extraordinary ingredients, or at least hidden components you might not expect. 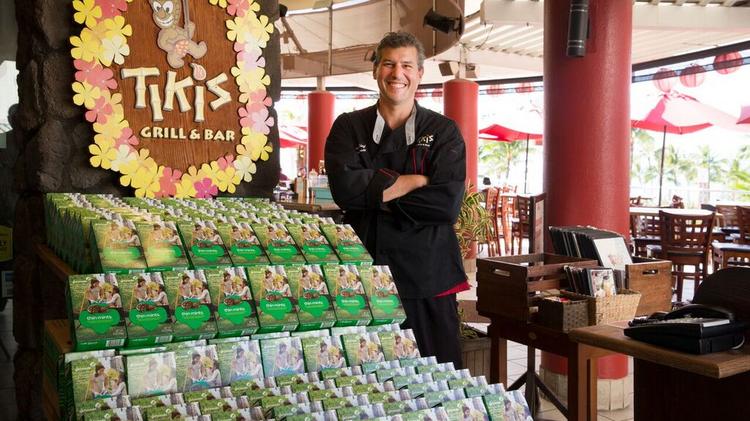 By Katie Murar  –  Reporter, Pacific Business News
a day ago

Hawaii's Girl Scouts will get the opportunity to expand their sales skills on Saturday in a Shark Tank-style pitching session at Tiki's Grill & Bar, called Cookie Tank.

Director of Operations Michael Miller and Executive Chef Ronnie Nasuti will be taking pitches at the restaurant from 11 a.m. to 4 p.m., and based on the strength of the pitch, the restaurant will purchase anywhere from two to 10 boxes of cookies per scout.

“We believe in empowering the community’s youth by helping them with their public speaking and sales skills,” Miller said. “Door-to-door business and family sales are probably one of the most common forms of cookie sales, but this direct business-to-business is another element that can be explored. We figured this was a fun, fair way to get sales from a lot of different scouts and troops.”

Tiki’s has a history of purchasing Girl Scout cookies and incorporating them into its menu. In 2017, it featured a Girl Scout Cookie Cheesecake made with Kona coffee and a Thin Mint Cookie crust, and ended up selling 1,350 cheesecakes. 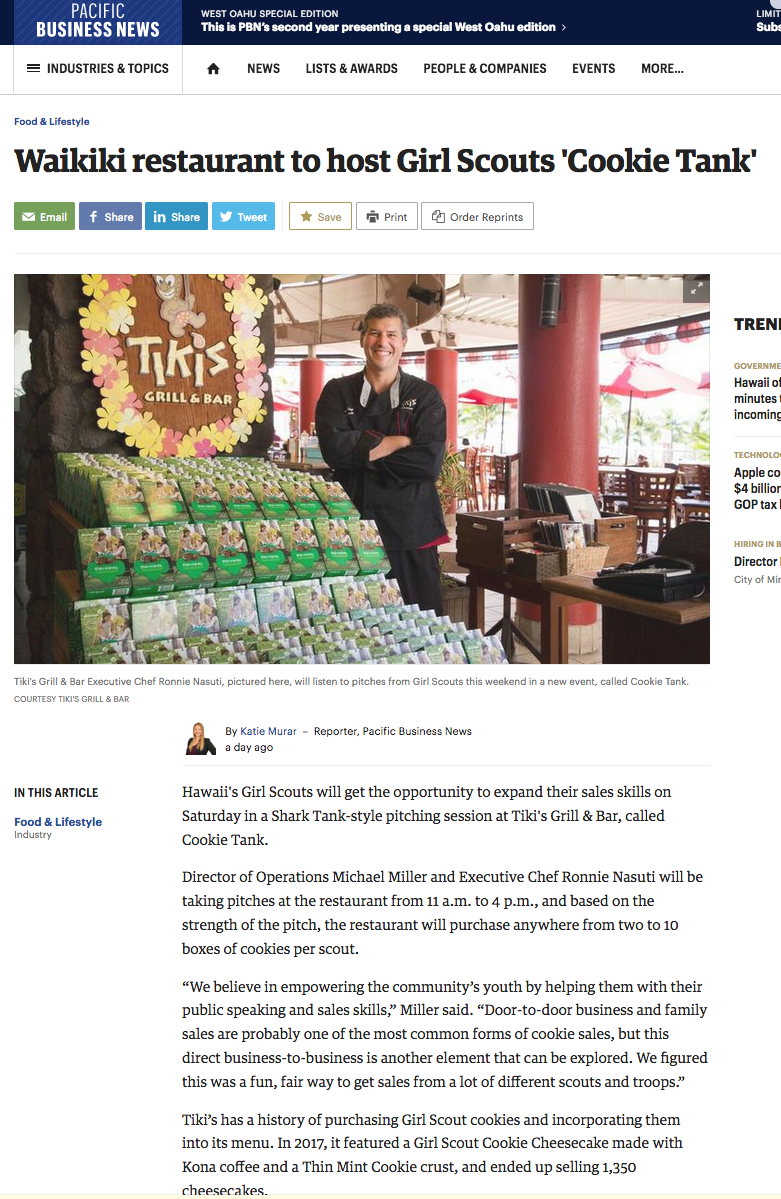 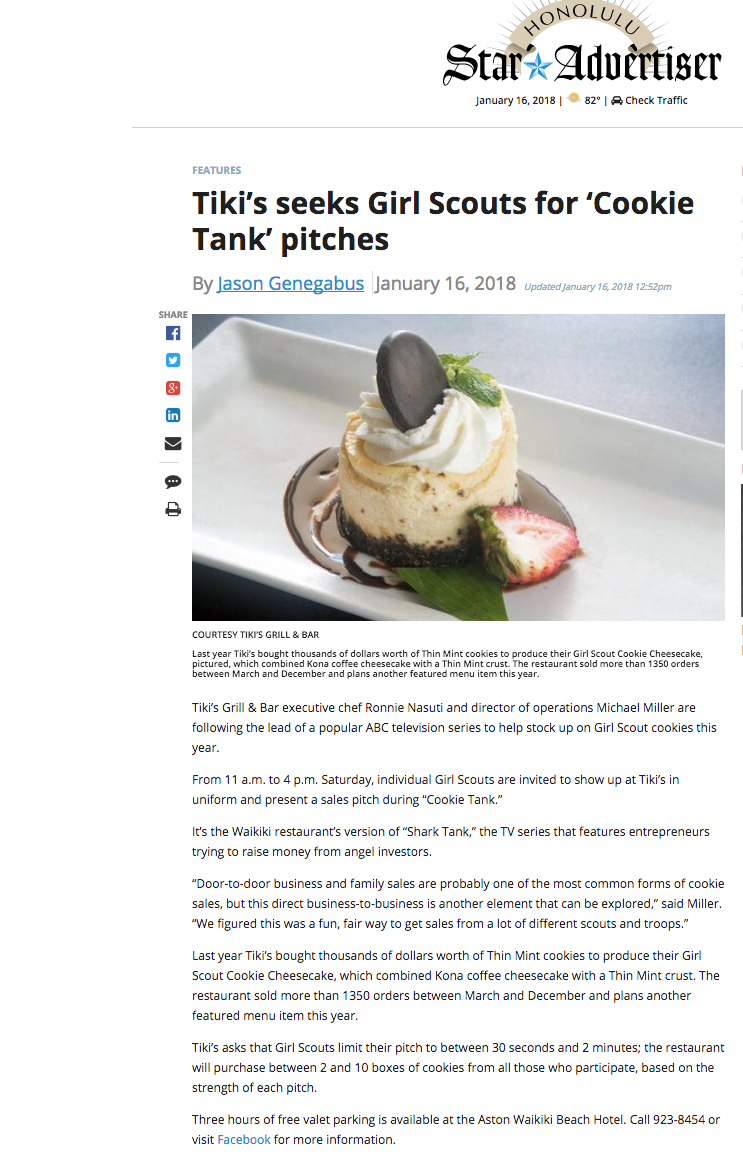 Before you shop, fuel up at Ala Moana's Christmas Bar pop-up

Bring your friends, an ugly sweater and some food because its only here until Dec. 31

The Christmas Bar is a new pop-up at Ala Moana Center serving festive and holiday-themed drinks – the most popular being a sweet, cream soda-based Hogwarts Butterbeer, finished with a marshmallow fluff foam. They don't have food, however, you're welcome to bring in your own. It's located in the former Magnolia Bakery space in the Ewa Wing next to Mr. Tea Cafe. Bring your friends, an ugly sweater and some food because the bar is only here until the end of December.

MAKE CHRISTMAS SHOPPING MUCH MORE BEARABLE AT THIS POP-UP BAR AT ALA MOANA CENTER.
BY CATHERINE TOTH FOX

THE HOGWARTS BUTTERBEER AT THE CHRISTMAS BAR, WHICH OPENED DEC. 1 FOR THE ENTIRE MONTH AT ALA MOANA CENTER.

Simply put, The Christmas Bar at Ala Moana Center is genius.

Stressed-out shoppers can take shelter in this new pop-up bar, which took over the 2,400-square-foot space vacated by Magnolia Bakery near Longs Drugs now through the end of the month. It offers a variety of festive martinis, spiked hot chocolate, glasses of wine, beers on draft and the already-popular Hogwarts Butterbeer, which can be made nonalcoholic. (But why?)

Michael Miller, director of operations and longtime veteran bartender at Tiki’s Grill & Bar, is running this jolly joint, which is decked with garland, Christmas lights and more ornaments than the tree at Honolulu Hale.

“For me, this is super fun,” says Miller, wearing a red collared shirt and a Santa hat. “It’s just about having a good time.”

THE POP-UP, CHRISTMAS-THEMED BAR OPENED IN THE SPACE VACATED BY MAGNOLIA BAKERY AT ALA MOANA CENTER.

VETERAN BARTENDER MICHAEL MILLER RUNS THE CHRISTMAS BAR—AND HE’LL GREET YOU WITH A “MERRY CHRISTMAS” WHEN YOU WALK IN.

If you can imagine where Santa’s elves went to pau hana, it would be this place. The servers are dressed in Christmas sweaters, socks and Santa hats. The menu features five merry martinis, including the Clause-mopolitan ($9) made with citrus vodka, Cointreau, lime and pomegranate juice. Other spirited spirits include a boozy eggnog ($9) with bourbon and a pinch of nutmeg; Mexican hot chocolate ($9) with Kahlua, rum and a pinch of cayenne pepper served hot or cold; and a winter sangria ($8) with vodka, white wine, apricot brandy, apples, cranberries and orange juice.

THE WINTER SANGRIA IS ONE OF A MORE THAN A DOZEN COCKTAILS, BEERS AND WINES OFFERED AT THIS POP-UP BAR.

The butterbeer, though, is the most popular, luring Harry Potter fans and muggles who loves the blend of caramel and cream soda. The adult version ($7) has vanilla vodka, Butterscotch Schnapps, cream soda and marshmallow fluff. I’ve had the one from Warner Bros. Studio Tour in London, and this is far better. Maybe it’s the alcohol.

There’s also an off-the-menu shot that’s worth inquiring about: The Shot of Joy ($7) combines Peppermint Schnapps, Pinnacle chocolate whipped vodka and créme de cacao for a joyous punch that’s so smooth it’s dangerous. It comes with a mini marshmallow studded with bits of candy cane as a chaser of sorts.

It’s not surprising, given the merriment here, that customers have already come back dressed as elves to sit at the bar or requested to hold their office parties here.

“We just wanted this to be super fun,” Miller says.

If only it would last.

Bill Tobin, managing partner and co-owner of Tiki’s Grill & Bar in Waikiki, has opened a Christmas pop-up bar at Ala Moana Center.

Michael Miller, Tiki’s director of operations, is managing The Christmas Bar, which is situated in a 2,400-square-foot space formerly occupied by Magnolia Bakery, which closed last December.

Tobin, Miller and Tiki’s General Manager Albert Aki decided to open the bar a few months ago, having already secured a liquor license for another concept.

“We were working on another concept with [General Growth Properties, which manages the mall] but the timing wasn’t right, so they approached us about the opportunity to open up a temporary spot,” Miller told Pacific Business News. “[The mall] has been great to work with, and they tried to help us expedite the process of opening.”

Miller said the bar is the result of recycled materials and help from friends and family, who came together to put up holiday decorations inside the space. The menu includes Christmas-inspired drinks, such as egg nog, cranberry mojitos and Hogwarts Butterbeer.

“Bill had done a similar concept on the Mainland, and we opened up on Saturday night after a little remodel of the space, mostly to the bar area,” Miller said. “We upcycled whatever we could from other projects, a lot of this stuff was waiting to go to the dump. We asked a few friends if they wanted to help decorate, and we worked on the drink recipes at home on our own time.”

The bar will be open until Dec. 31 and has brought in customers of the mall as well as Ala Moana Center employees. The Christmas Bar is staffed by current Tiki’s employees.

“We have about two on staff,” Miller said. “We just asked anybody who wanted to make some extra money during the holidays.”

Miller is considering adding an entertainment component to the bar, such as caroling, or playing Christmas movies.

The restaurant trio—Miller, Tobin and Aki—may open another, more permanent concept together in the future, though it is still too early for specifics, Miller said.

Many of you know that I'm the proud director of operations for Tiki's Grill & Bar. A few of you know that I've been teaching classes focusing on consumer behavior in the business program at the University of Hawai'i - West Oahu. Sharing my social media marketing and business experiences with my classes been very rewarding. 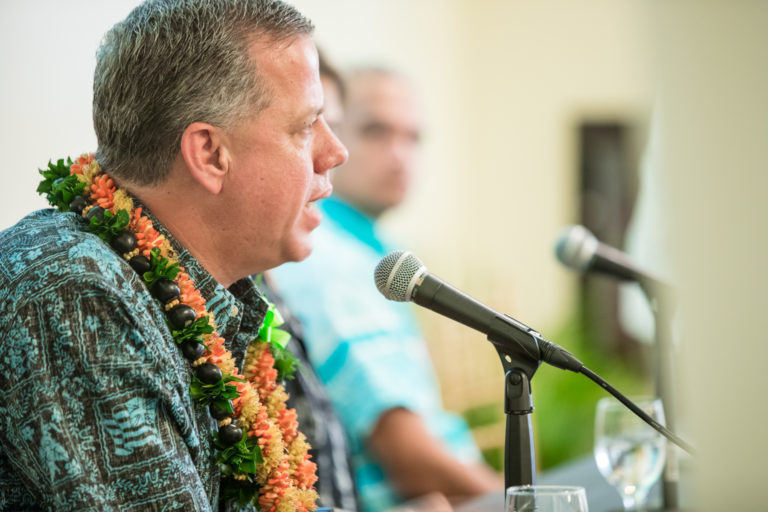 Last year I was honored to be asked by Hawaii Business Magazine to speak at the final SmallBiz Academy of the year. The topic was "Monetizing Your Digital Media."

Editor Steven Petranik welcomed everyone and introduced Thomas Obungen, digital and social media strategist of Upspring Media LLC and Associate Editor of Frolic Hawaii. He shared about using Facebook to drive excitement and engagement, also discussing sequence and frequency of posting. He explained how testing pricing for lunches made them come up with a price of $10 per box lunch, which allowed higher sales $12 as people bought two at $10 vs. one at $12.

Kuhao Zane, director of design and marketing, represented the aloha shirt company, Sig Zane Designs. It was his Dad's 72nd birthday and he asked everyone to stand and wish him birthday, sharing a story about how Hawaiians embraced the printing press to share knowledge in the Hawaiian language with others. He explained how today's platforms still allow for sharing, with their shirts each telling a story. Takeaways from Kuhao included the storefront, using elements in , placing content before sales.

Jennifer Diesman, VP of HMSA, shared the challenges of being a mature company and what it took to launch an app more about health and well-being than an insurance company and finding the right partner in ShareCare to get it done.

I spoke about Yelp and went beyond the basics. Speaking about understanding consumers and embracing the platform, leveraging data along with guest experience to make improvements, yet also doing the basics.

Hosted by Steven Petranik and Cheryl with Kira Chong Tim and Michelle Okada and Jeff Hawe, along with the rest of the team at Hawaii Business Magazine.

It was hosted in the downtown Honolulu Business District with about 120 guests in the room. http://www.hawaiibusiness.com/5-things-small-businesses-should-know-about-monetizing-their-digital-media/ 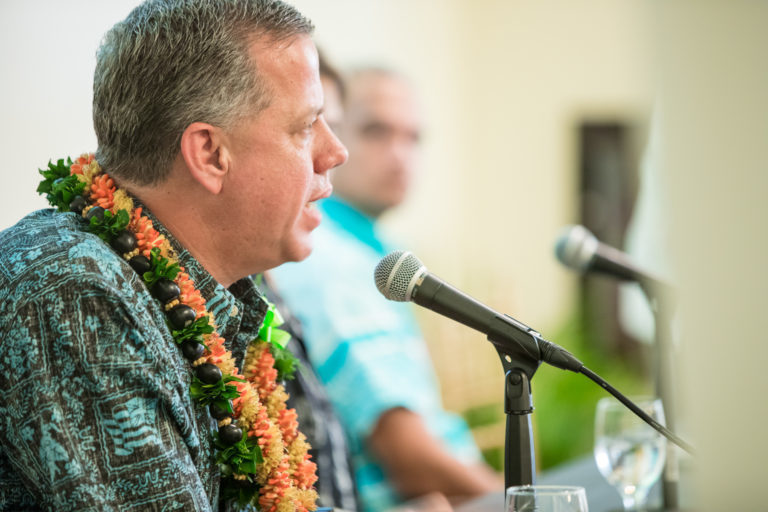