Pop on in to this holiday hotspot It’s time to dust off the antlers and elf ears, time to get that magnificently ugly holiday sweater out of the mothballs! For a limited time, the Christmas Bar Pop-Up at Ward Entertainment Center is back for the 2019 season, and it’s bigger, better, and more festive than ever. Just in time for the holidays, Big City Diner has been transformed into an over-the-top holiday spectacle. Surrounded by lights, tinsel, candy canes, ornaments, and all the trimmings, you and your family and friends can enjoy treats that might have been created in Santa’s toy kitchen workshop. It’s a collaborative effort between Lane Muraoka of Big City Diner and Bill Tobin, Albert Ake, and Michael Miller of Tiki’s Grill & Bar. Delectably constructed with smoked gouda and sharp cheddar on sesame Caesar crusted sourdough, the Kris Kringle’s Kimchee Grilled Cheese ($11) is a local take on an old favorite. Mele Kalikimaka Mini Turkey Pot Pie ($12) actually consists of two delicious pies in puff pastry, topped with cranberry orange relish and housemade gravy. And their name will make you chuckle, but their taste will make you moan with pleasure: the Grandma Got Ran Over By a Reindeer… Meatballs ($13) are made with Hunan-style venison and pork, and glazed with hoisin sesame sauce. If you’d like a festive beverage to go with your nibbles, there’s an enticing menu of drinks that can be made with or without alcohol. “We anticipate our Frozen Hot Chocolate and Butter Beer to be our top sellers, but don’t forget about the Melted Snowman Martini or the Clause-mopolitan,” says Lane Muraoka, owner of Big City Diner. “There’s fun for everyone.” And with a trolley stop nearby, this is the perfect place to wrap up a tour of the Honolulu City Lights! After the success of our last Christmas Bar we needed an even bigger and better location where we could also offer limited food items developed by our culinary team,” said Elf Michael Miller. “Ward Entertainment Center’s space allows us to get very creative with NEW drinks, pupus and decorations.  Chef Ronnie Nasuti has had a lot of fun bringing the holiday spirit to the menu.  Featured items include the Kris Kringle Kim Chee Grilled Cheese, Grandma Got Ran Over By a Reindeer...Meatballs, and Mele Kalikimaka Mini Turkey Pot Pies.”

“We wanted to do something really fun this year for the holidays and I wanted to do something with my restaurant friends,” said Elf Lane Muraoka. “We anticipate our Frozen Hot Chocolate and Butter Beer to be our top sellers, and both can be made with or without alcohol. But don’t forget about the Melted Snowman Martini or the Clause-mopolitan. There’s fun for everyone!”

A limited-time pop-up bar, complete with holiday-themed drinks and food and over-the-top decor everywhere you turn. Prepare to feel hugged by Christmas as soon as you walk in the door!

With movies like Frozen 2 and Star Wars: The Rise of Skywalker coming out, along with the nearby trolley stop for Honolulu City Lights tours, it’s going to be a fun & festive holiday season alongside the other local shops and businesses in the Ward and Kaka’ako neighborhood.

The 2019 THE Christmas Bar is a collaborative effort between four top elves in the industry: Lane Muraoka of Big City Diner, with Bill Tobin, Albert Ake, and Michael Miller who all also work at Tiki’s Grill & Bar.

So get out your ugly sweaters, dust off those reindeer antlers, and get into the holiday spirit!

All five other Big City Diner locations are open for regular service and are excited to have you join them for the holiday season at any of their other locations on the island.

Congratulations to all the 2019–2020 Honolulu Star-Advertiser 'Ilima award winners!

We appreciate being listed as one of the top restaurants amongst so many wonderful restaurants in the state. Pick up your issue today at newsstands or online of photos, reviews, insights.

Mahalo to all those who voted and worked on the issue! Honolulu Star-Advertiser ILIMA AWARDS 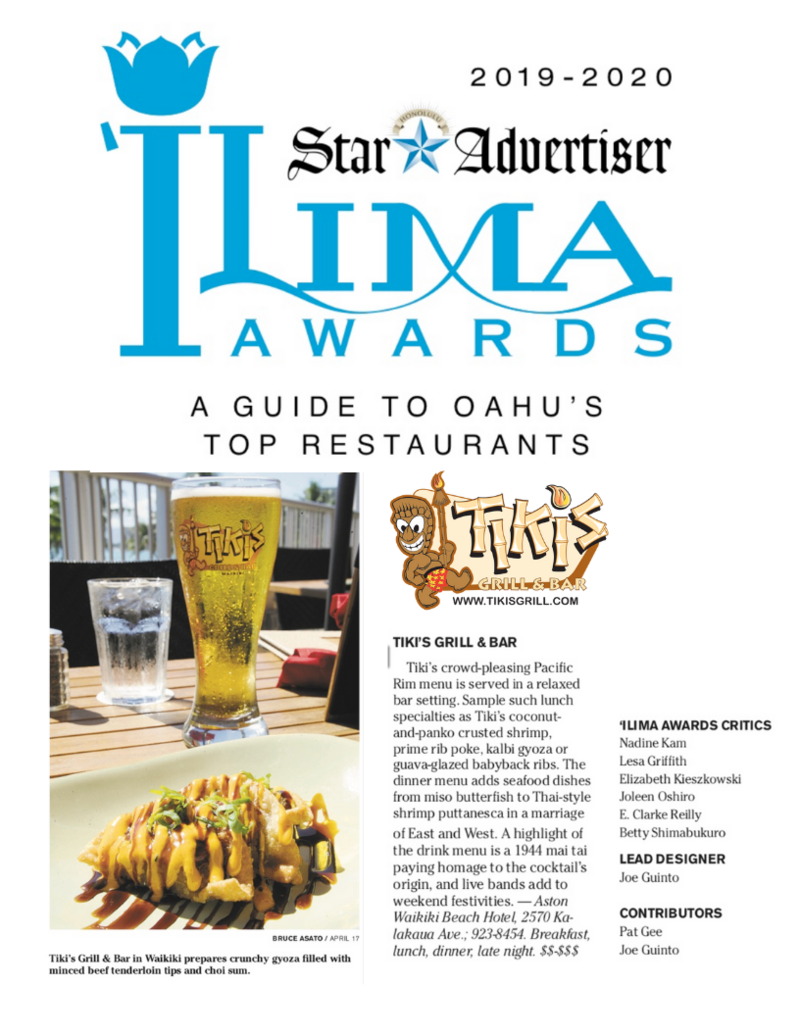 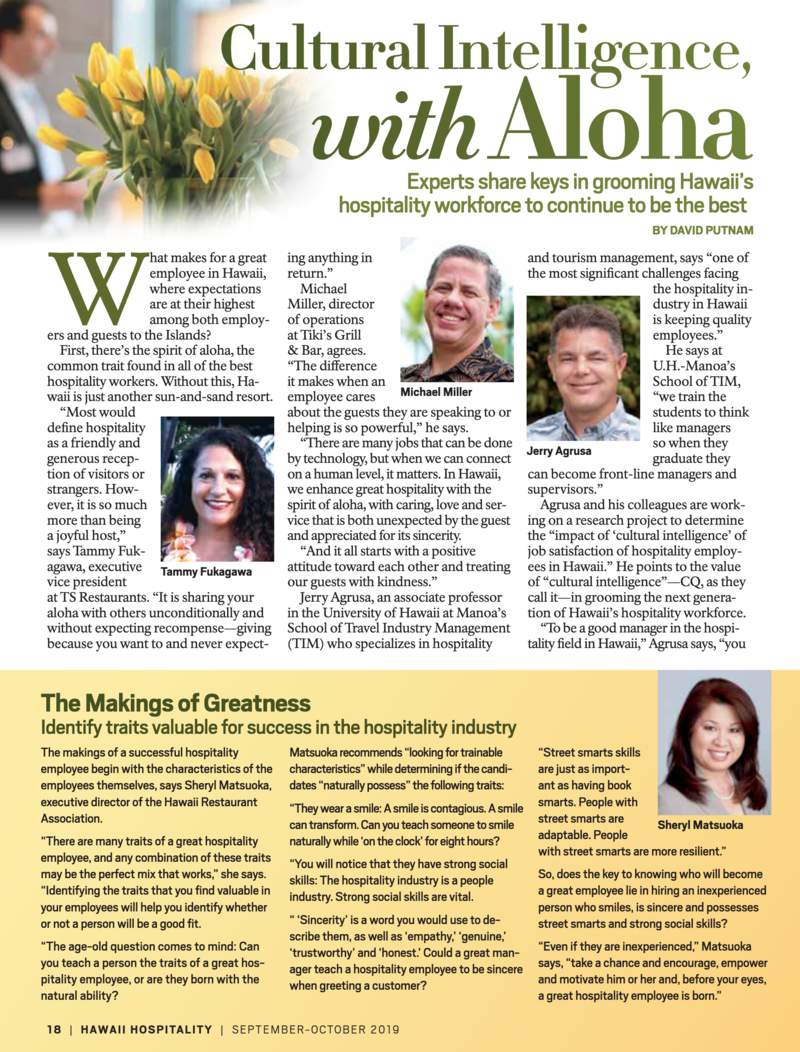 Captain Jacob Brown was the Master(Captain) of Steam Tug Pele.
His Side of the Story.pdf
(102K)
Hawaiian Gazette Jan 10 1872 Capt Jacob Brown letter Pele.pdf
(5,302K)
Download Hawaiian_Gazette_Jan_10_1872_Capt_Jacob_Brown_letter_Pele.pdf
Download His_Side_of_the_Story.pdf
Before we were born my dad was radio announcer on Oahu. Here is a quote when I asked him about it.

KLEI First THEN KZOO THEN KLEI FULL TIME, THEN KGU.   Many of my voiced commercials recorded at KGU where aired on many other stations.  KGU management use my recorded voice as a policy and as a come on to ad agency’s; that it had the professional quality talent voices.  At times I made 8 or more taped dubs for an ad agency.   So you could dial in Kumu, Kpoi, Kgmb, etc.and hear my voice.   I heard that some of my voiced commercials even played on Maui stations and some outer islands stations.  At times my voice was used exclusively for certain business, I.e.  Union 76 Gas. His Radio nam was Tracy Trace. 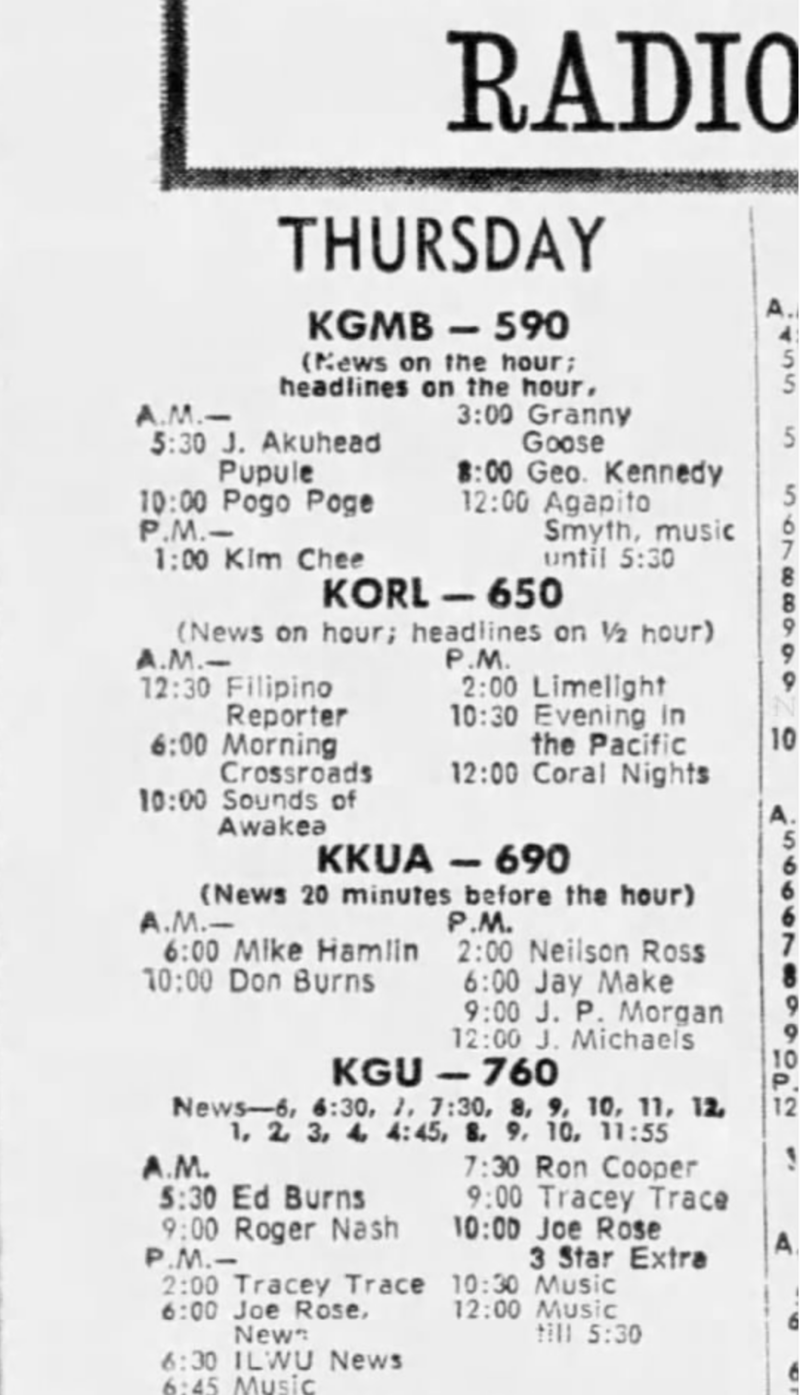 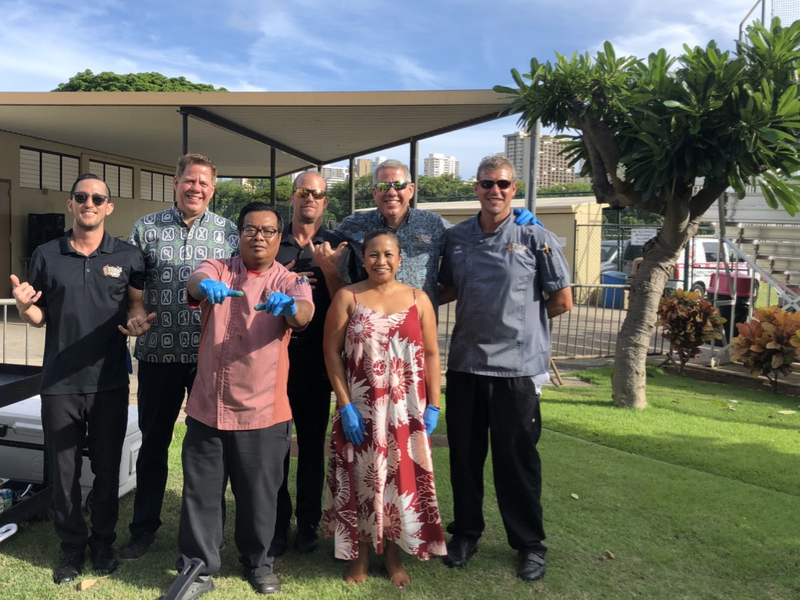 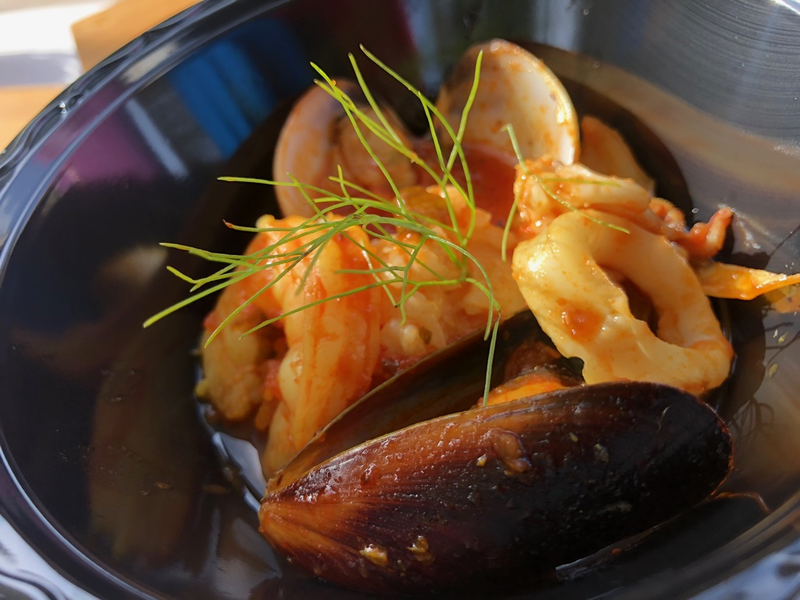 As the years went on and the Internet was born. Voice over internet protocol (VOIP) was created, soon IRLP, AllStar and Echolink was born. The ability to link a ham radio to a computer while the computer was linked into the internet allowed the ham radio world the ability to reach out to further places and countries. it wasn’t long after that, Alaska morning net started using this new voip technology to link nodes to one central Hub or Reflector.  you can find the Alaska morning net on IRLP  Winsystem reflector 9100 channel 9 (9109). if using AllStar you can find the Alaska morning net on Allstar Hub 29332 and 27133, for Echolink you can find us by searching for WL7LP-R or if using a node of your own. use DTMF number 9191.

The Alaska morning net has come a long way over the years and is currently the longest running net on the internet. It is a two hour long net. We are a rag chew type net and enjoy chatting with each and everyone of you. Folks from all over the world join us each morning. We are one big happy family and once you check in with us you become a part of that family. The Alaska morning net would not be what it is today without you the people that check into it each and every morning. We appreciate each one of you. I don’t want to leave out our awesome net controllers that help run the net every day each week. We have a different net controller for every day of the week and each helps each other out when they can’t run the net. Without them and you there would be no Alaska morning net. I want to thank you all for keeping the Alaska morning net alive for all these years.

The net runs Monday through Saturday from 9 am to 11 am Alaska standard time. again it is a rag chew style net. We love getting to know different things about you each day. Become part of our big happy family and come join us.

I would like to provide as much information about the AMN as much as possible, so if there is any one out there that has further info on the AMN. Please feel free to send me an email. You can use the contact link up in the menu up top and I will add that info to this page. Thank you all again for making the Alaska morning net what it is today. I look forward to hearing and chatting with you all.

The AMN is hosted on a computer system that is constantly growing. Maintaining the current system and adding new equipment can be expensive and since AMN is a ham radio system, no form of commercial income is allowed. That means that for the system to be successful, it depends on volunteers and donations.

Download Red_Lantern.pdf
My Dad, Gerald "Jerry" Miller was a Radio Disc Jockey/Announcer in the late 60's on the island of Oahu.

The newspaper would print the radio stations and who was going to be on the air. My dad's radio name was "Tracy Trace" on at 2:00pm on KGU 760 AM.

Here is news clipping from 31 Oct 1968, page 45 of The Honolulu Advertiser 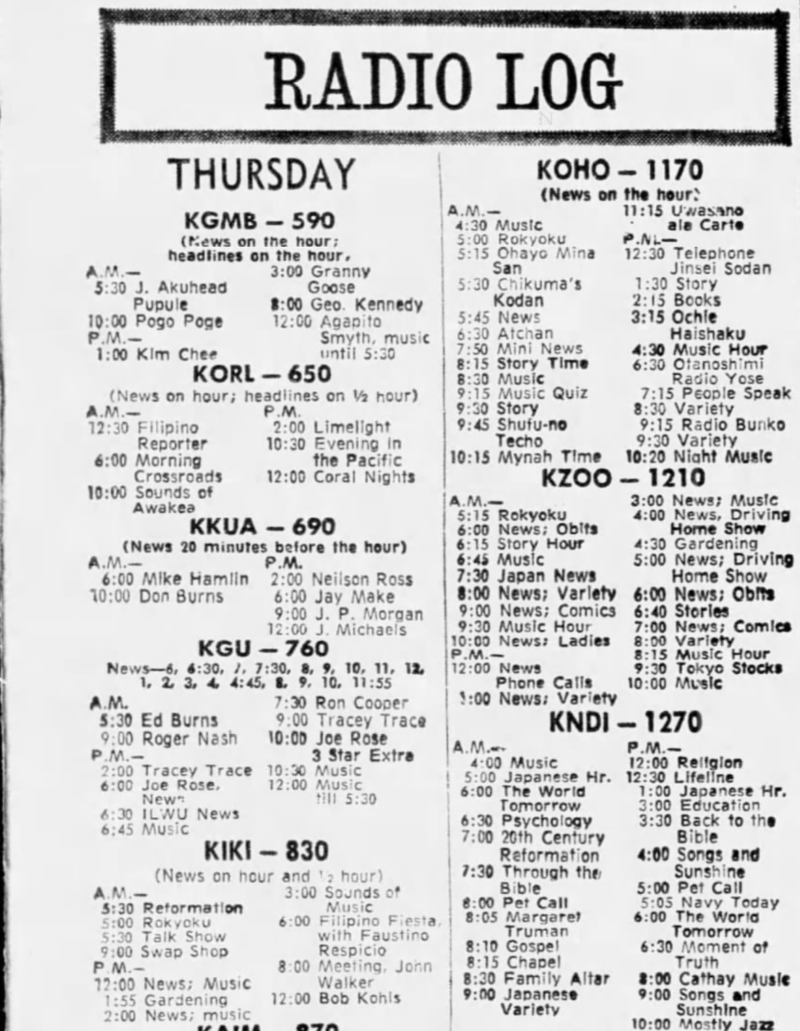 To see the whole page.:

[+] You're welcome to add me to your address book