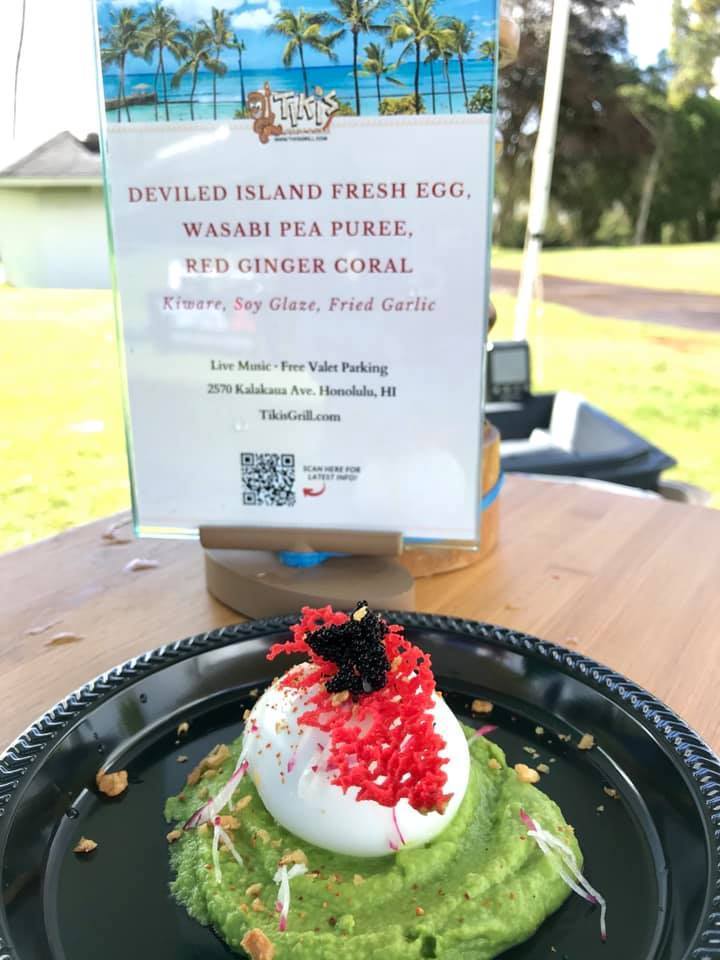 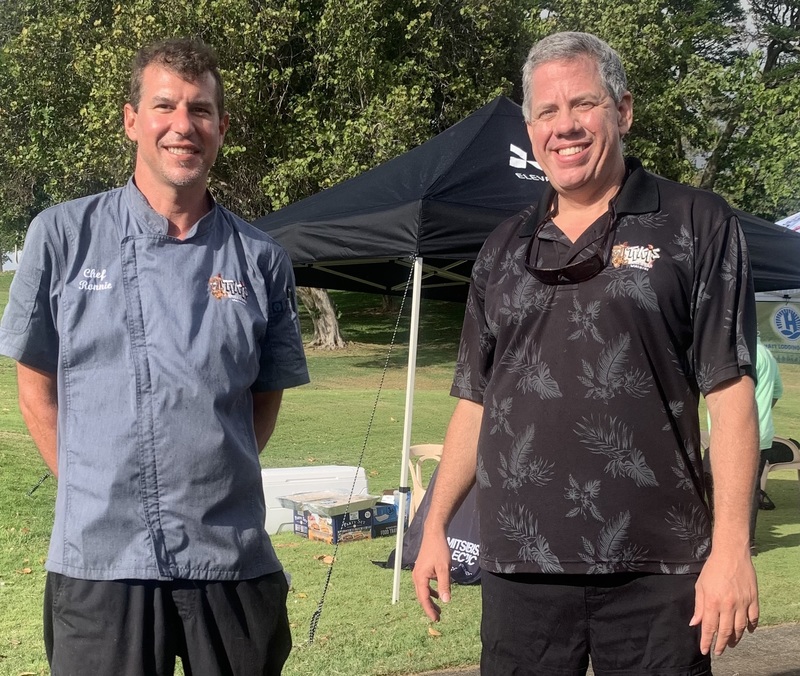 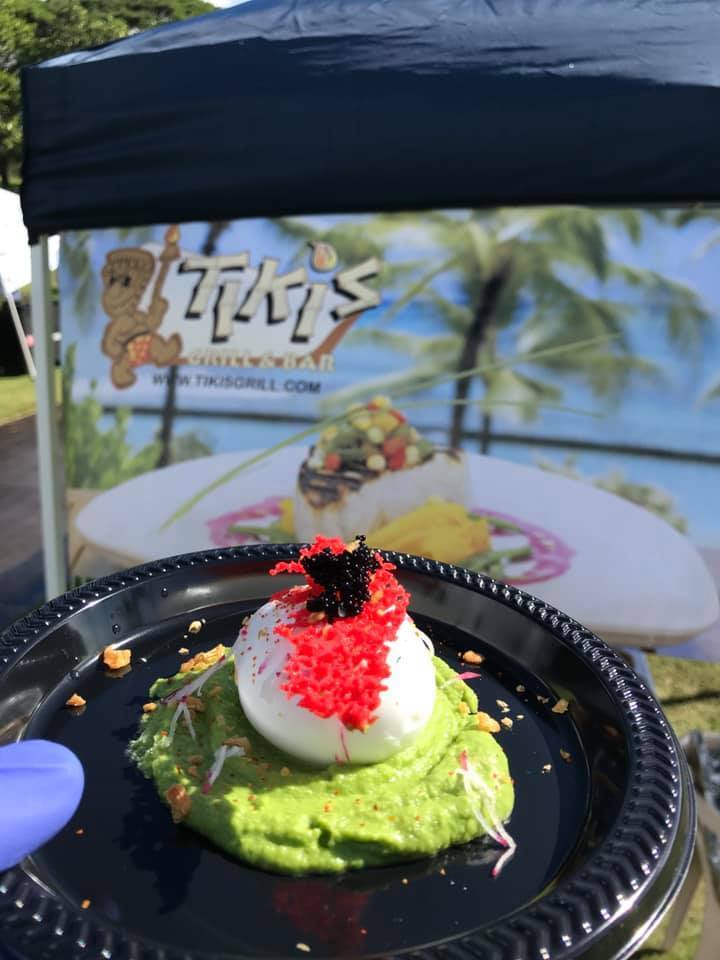 Mission to get Tower 6 topmast off and upgrade the 2 element JK 80M rotatable mono-band Yagi.
This O’ahu location is on the north shore. ( NOT MY STATION)
Mahalo to all that helped make this happen!
An amateur radio operator is someone who uses equipment at an amateur radio station to engage in two-way personal communications with other amateur operators on radio frequencies assigned to the amateur radio service.
Amateur radio operators have been granted an amateur radio license by a governmental regulatory authority after passing an examination on applicable regulations, electronics, radio theory, and radio operation. As a component of their license, amateur radio operators are assigned a call sign that they use to identify themselves during communication.
An amateur radio operator Amateur radio operators are also known as radio amateurs or hams. The term "ham" as a nickname for amateur radio operators.
Shot and edited by Michael KH6ML
Sending emails using Ham Radio with a sound card and a laptop. No internet needed. VARA-FM mode in Winlink. 441.00 UHF Icom IC-7100 35 watts with a mag mount antenna on a truck. Kahala Lookout right outside of Diamond Head Tunnel to Pukalani Maui. Icom IC-7100 Radio HF/UHF/UHF 2015 MacBook Pro boot camp windows 10. http://www.winlink.org - Download a free copy of winlink VARA FM - https://rosmodem.wordpress.com/ Download your free copy (lower speeds) If you like it pay for the license to get faster speeds. VARA FM AND WINLINK SETUP GUIDE -By George Thornton - AE7G http://www.masterscommunications.com/... http://www.earchi.org/education/ Emergency Amateur Radio Club - Hawaii would like to assist Oahu residents in obtaining or upgrading their FCC Amateur Radio licenses. ARRL - http://www.arrl.org/

First time working a 🛰 and I was able to receive a photo From theInternational Space Station
International Space Station or ISS sent via radio waves on ham band of 145.800 with mode  PD120 SSTV. The clearest image received was fixed yagi to Yaesu 857d and then into pc for decode. The third image posted is from handheld ANYTONE 878 to iPhone via the speaker.  This is from ARISS Russia iSlow Scan Television (SSTV) image transmissions on 145.800 MHz FM from the International Space Station.
ARISS Amateur Radio on the International Space Station celebrated the life and accomplishments of astronaut, scientist, and ham radio pioneer Owen Garriott with a commemorative SSTV event featuring images from Garriott’s work with ham radio during his missions in space. This event was on August 1 til August 2019.
Transmissions will be sent at 145.800 MHz FM in the SSTV mode PD-120. Once received, images can be posted and viewed by the public at http://www.spaceflightsoftware.com/ARISS_SSTV/index.php and you can receive a special SSTV ARISS Award for posting your image. See https://ariss.pzk.org.pl/sstv/ for details.
This event uses a computer in the ISS Russian Segment, which stores images that are then transmitted to Earth using the ARISS amateur radio station located in the Service Module which employs the Kenwood TM D710E transceiver.
The Iphone Progam I use is SatSat is a satellite tracking software, for radio amateurs, scientists or hobbyists. It displays current and next passes for any satellites, it also provides beacons frequencies to listen to.

- SatSat works totally offline, with its own predictions and maps.

- Watch where the ISS or any other satellites are in real time.

- Add future passes to your calendar.

I have been sending email using just my laptop and my ham radios. This is the first time I'm going to try and send a blog post to my mahalomichael.com site.

There is little to no formatting when sending emails via winlink. - EOM

===== This message was sent from an amateur radio account. If you reply, be mindful that your reply will be subject to inspection by the public. If your reply contains prohibited content (profanity, personal or commercial business information, etc.) it may not reach its destination, and will endanger your correspondent's license. Ask your correspondent if you have any questions.

It was just Jesse and I working and business had already started to pick up. Three gentlemen came up the stairs from the street. I looked over and thought, “That guy sure looks like somebody I know.”  The men came up to the restaurant front, signed in, took their temperature checks, and we got them seated. They were nice and kind, wore their masks, and Jesse then greeted them and took their order while I worked on a few other things. I delivered their food to the table and they asked for a side of blue cheese. It then dawned on me - wait a minute, I think I know him, wait a minute, oh yeah, he might be…” 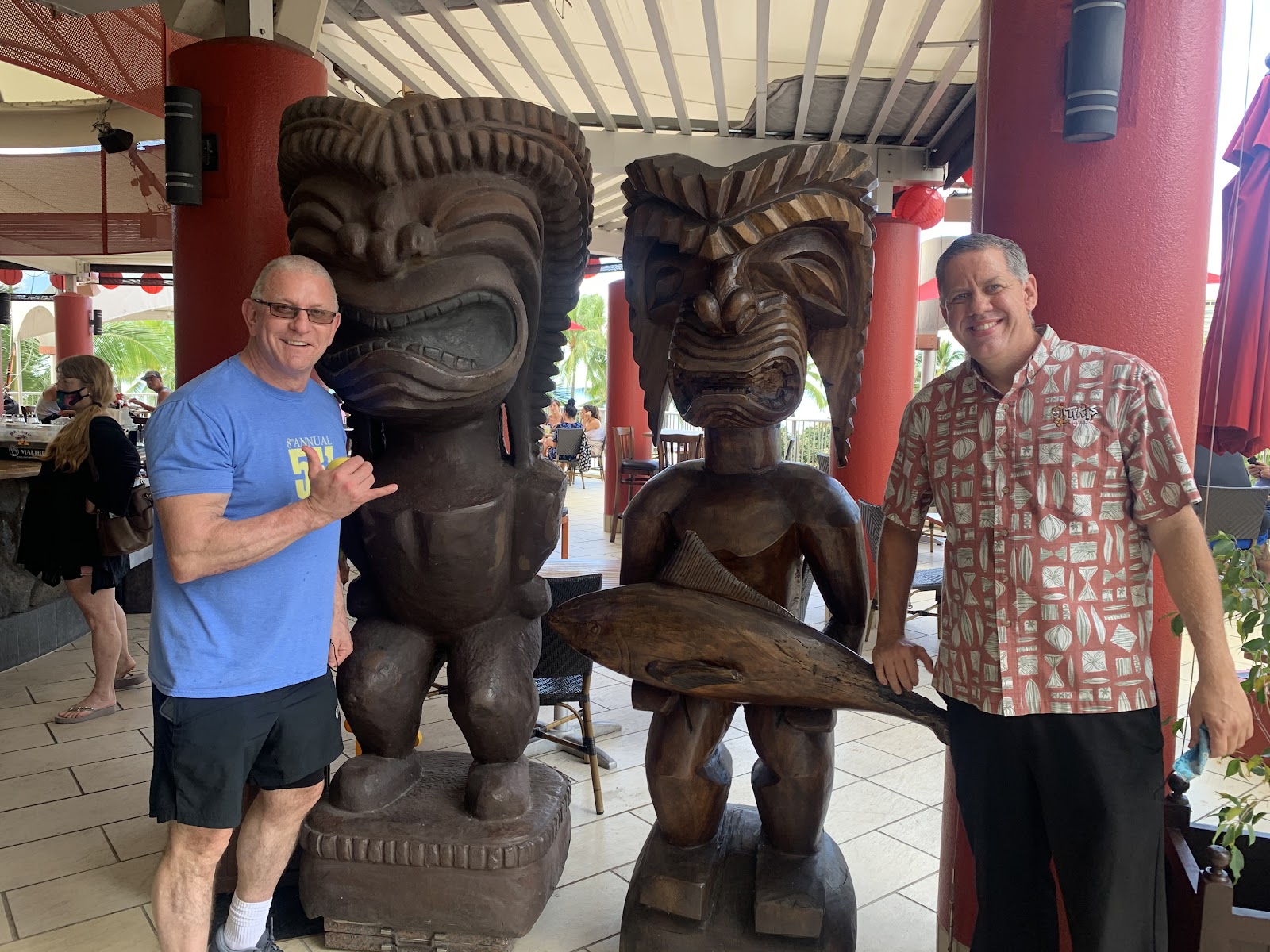 I thought, oh well, I’ll drop off the blue cheese and let them enjoy their meal. And then as I was pre-bussing the table, he said those volcano wings are really good, “please put another order in” that sound like something someone in our industry would say...

I asked the guest that I thought I recognized, “Are you ever mistaken for somebody famous?” The two other gentlemen at the table then chuckled. He answers and says, “All the time.” And one of the other guests says, “Yep, that's him.” And all three of them and myself had a good laugh, because our guest was indeed, Chef Robert Irwin from the popular show, Restaurant Impossible.

I said, “You know I didn't want to bother you, but I wasn't sure if it was you because in my interactions with you, you’ve been so calm, quiet and polite, and in the show you’re a little bit more animated and louder when you want something.”  He and the other guest started laughing as well, and he said, “Yeah, well I'm not here to fix anything in your restaurant.” We all laughed.

After refreshing the table, I brought back a big, organic Kaneohe lemon for him. I handed it to him and said it was for him to enjoy when he was ready for it, either to put in a drink or squeeze on some food. It was great to see his joy and excitement for something so simple. He smelled it, squeezed it in his hands and then passed it around the table for the other gentleman to appreciate. And he said, “This thing smells great, I can't wait to try it.” I let Jesse wrap up the table and moved on to deliver more food. On his way out he hunted me down and thanked me for the experience that he had and said “we will definitely be back.” 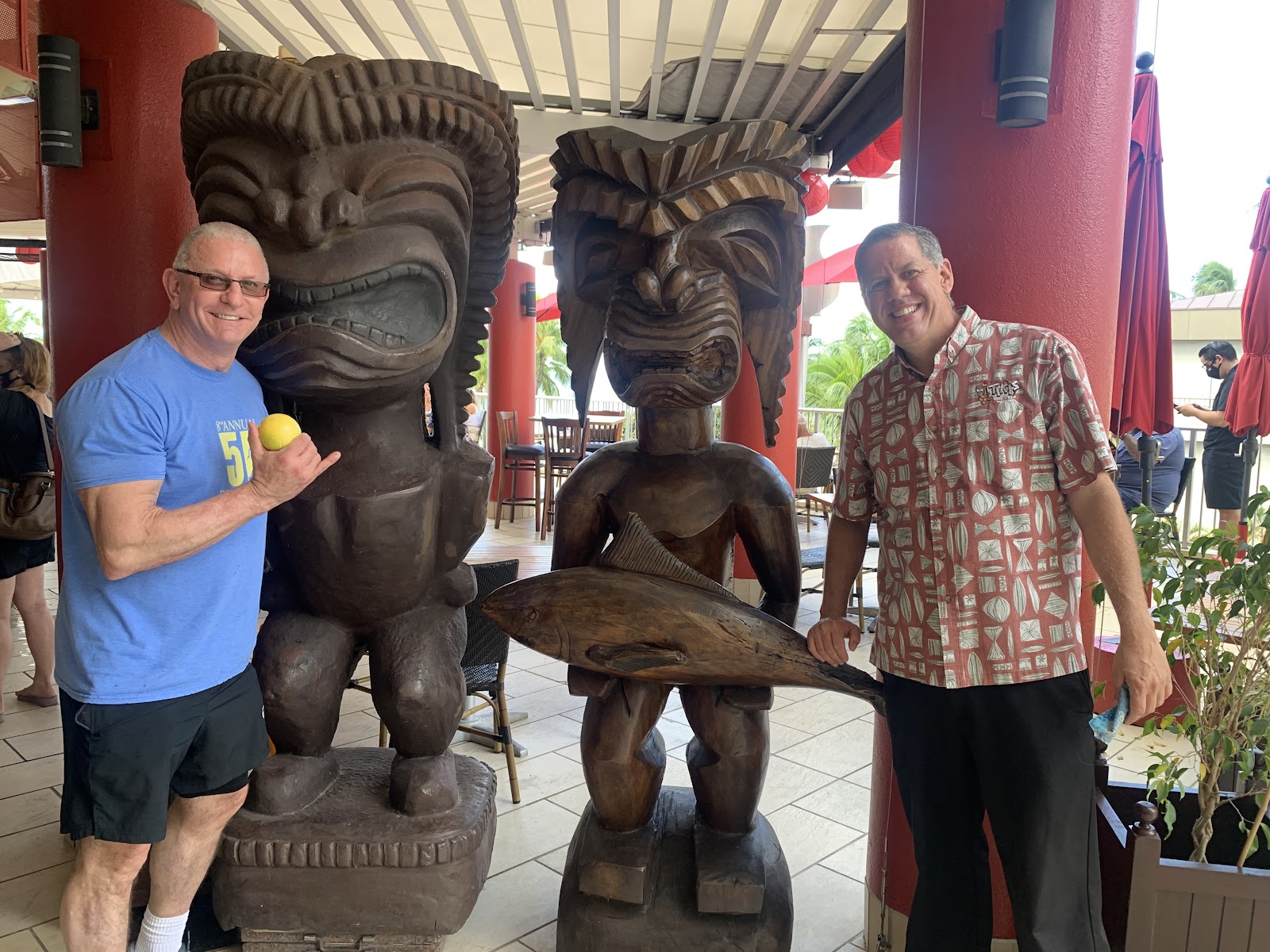 I asked if it would be appropriate and if he had time to get a picture. He said, “I was hoping you'd ask.”  So we took a picture out in front of the Tikis and at first it was gonna be with the masks on and then he suggested that we just stand 6 feet apart and take the masks off so I could get a good picture. One of the guys took the picture. So that's my fun, memorable Robert Irvine from Restaurant Impossible story - a nice, genuine guy and it made my week. 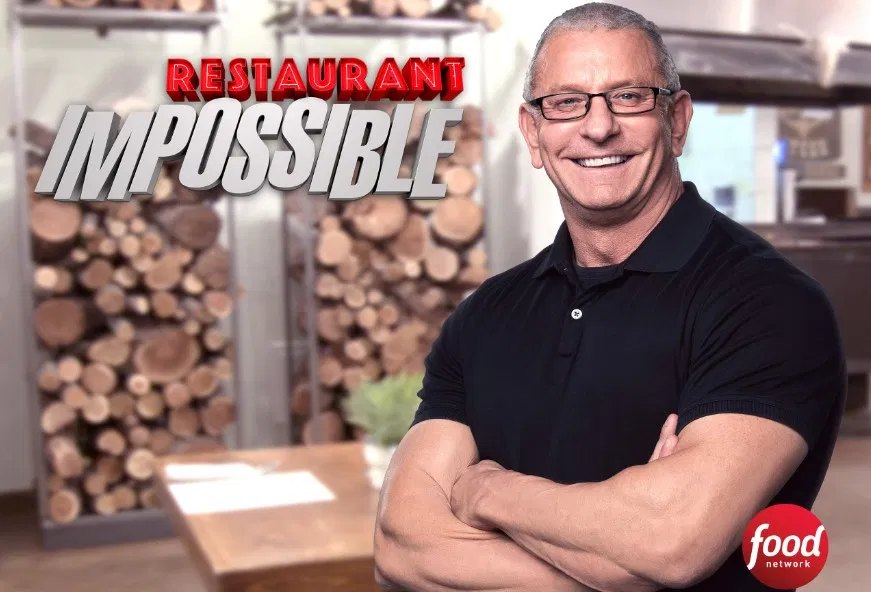 Restaurant: Impossible is an American reality television series, featuring chef and restaurateur Robert Irvine, that originally aired on Food Network from 2011 to 2016. After a three-year hiatus, the show returned on April 20, 2019.[1] The premise of the series is that within two days and on a budget of $10,000, Irvine renovates a failing American restaurant with the goal of helping to restore it to profitability and prominence. Irvine is assisted by an HGTV designer (usually Taniya Nayak, Cheryl Torrenueva, or Lynn Kegan, but sometimes Vanessa De Leon, Krista Watterworth, Yvette Irene, or Nicole Faccuito), along with general contractor Tom Bury, who sometimes does double duty as both general contractor and designer. After assessing the problems with the restaurant, Irvine typically creates a plan for the new decor, oversees the refurbishment of the restaurant, reduces the size of the menu and improves the quality of the entrees, develops a promotional activity, educates or resolves conflicts for the restaurant's owners, or trains the staff, as needed for each restaurant.[2] https://en.wikipedia.org/wiki/Restaurant:_Impossible

It was my first time to join the Australia, New Zealand and Africa DX Net  (ANZA DX NET)  https://anzadxnet.webs.com 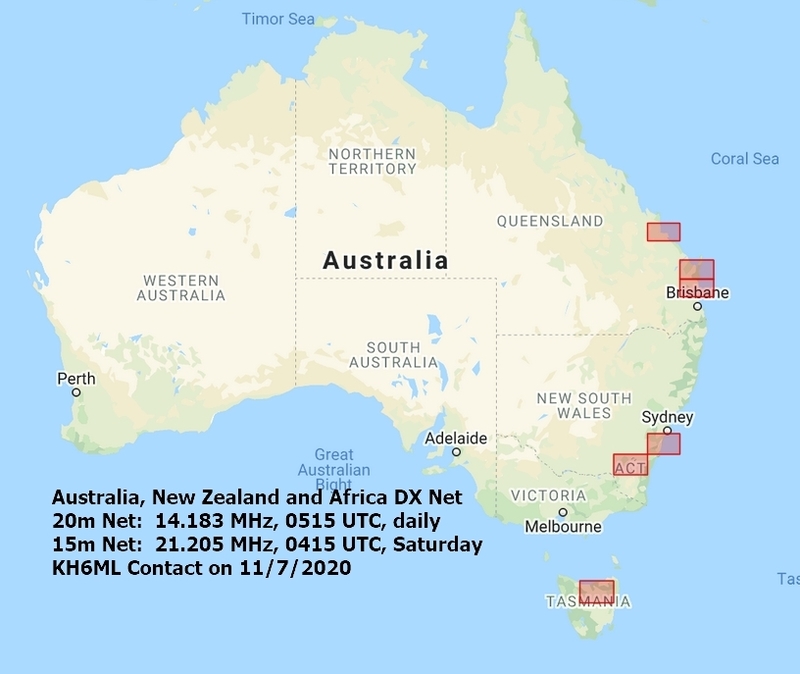 List operation, say your call sign, stand by for calls
Net runs for about 1 hour, all operators welcome,
DXpedition, special-event, portable, mobile, QRP
QSO is brief exchange of call sign and signal report
Please do not spot the Net on clusters or skimmers
ANZA DX Net has been operating for 50 years.
MAP MADE WITH http://wg7j.reinalda.net/gridmapper/gridmapper.php 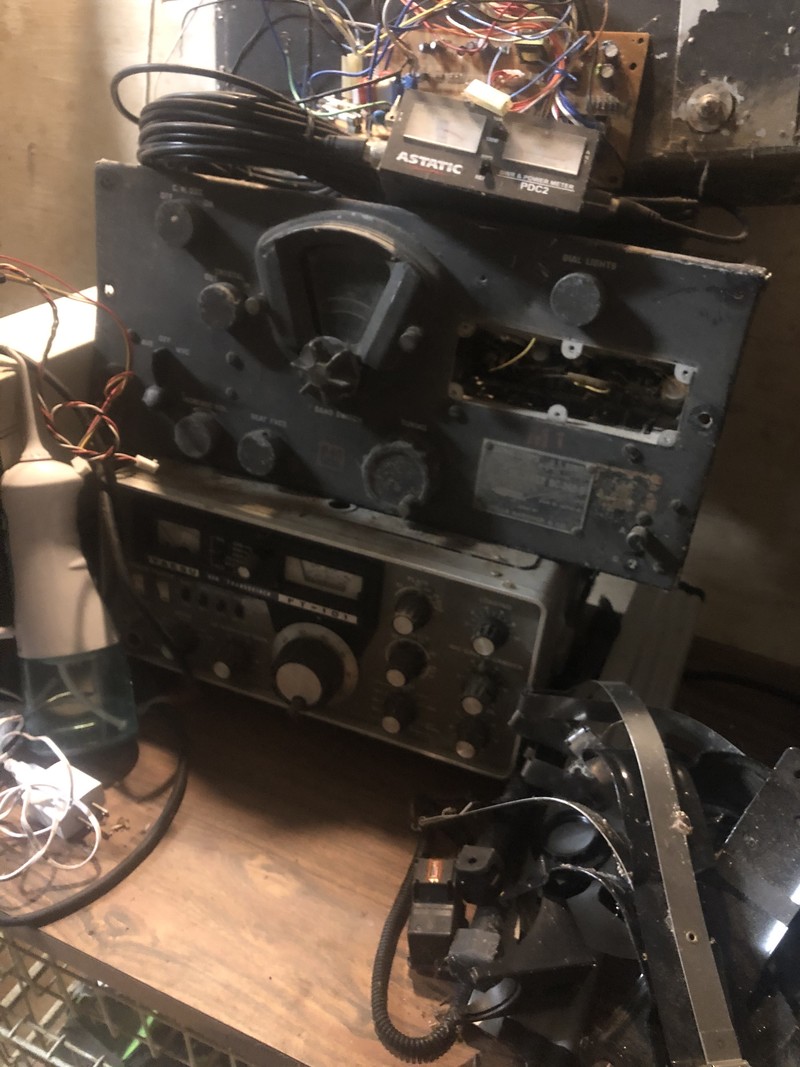 The Alaska-Pacific Emergency Preparedness Net is one of the oldest emergency traffic handling nets on amateur radio.
The net meets on 14.292 MHz in the 20 meter Ham band, Monday-Friday at 0830 Alaska Time. If you need a time calculator here is a link.

Net control monitors 14.282 beginning at 15 minutes after hour for early check in.
This is a roll call net. If you cannot hear net control, it will be appreciated if you wait until sweeps are made and do not call in the blind. Only break in if you have a contact or an emergency  We will pick up late, missed and visitor check-ins after roll call is complete. Please keep this frequency clear until the net on 14.290 has closed; this includes tuning up and looking for early check ins. NCS monitors 14.282 beginning at 15 minutes after hour for early check ins,and will switch to 14.292 at half past hour of the roll call.

Fortunately, there have been no major disasters in Alaska in recent years, but when the need arises again, the Alaska-Pacific Emergency Preparedness Net will be there.

The "A-P Net" originated as a result of the Good Friday Earthquake that struck Alaska in 1964.  During that disaster government and private communication systems failed, and Ham radio operators provided vital links to the rest of the world.  After the earthquake, the 14.292 frequency became known as “the place” for Alaska and Lower 49 hams to meet and pass traffic.
Mahalo to Mikey R from Tiki's Grill & Bar and chef Jeffrey Vigilla and all the other Volunteers and food bank staff and leaders that showed up.  For this massive Hawaii Foodbank distribution. I mainly worked on passing 1500 local cabbage heads . When the produce boxes and bags were all built. I got moved to the frozen hamburger and Kalua pig distribution tables . I’m sore and thankful. Great people to volunteer with, shade and joy all day long.  If you want to volunteer or donate or know someone that needs help go to https://hawaiifoodbank.org/. 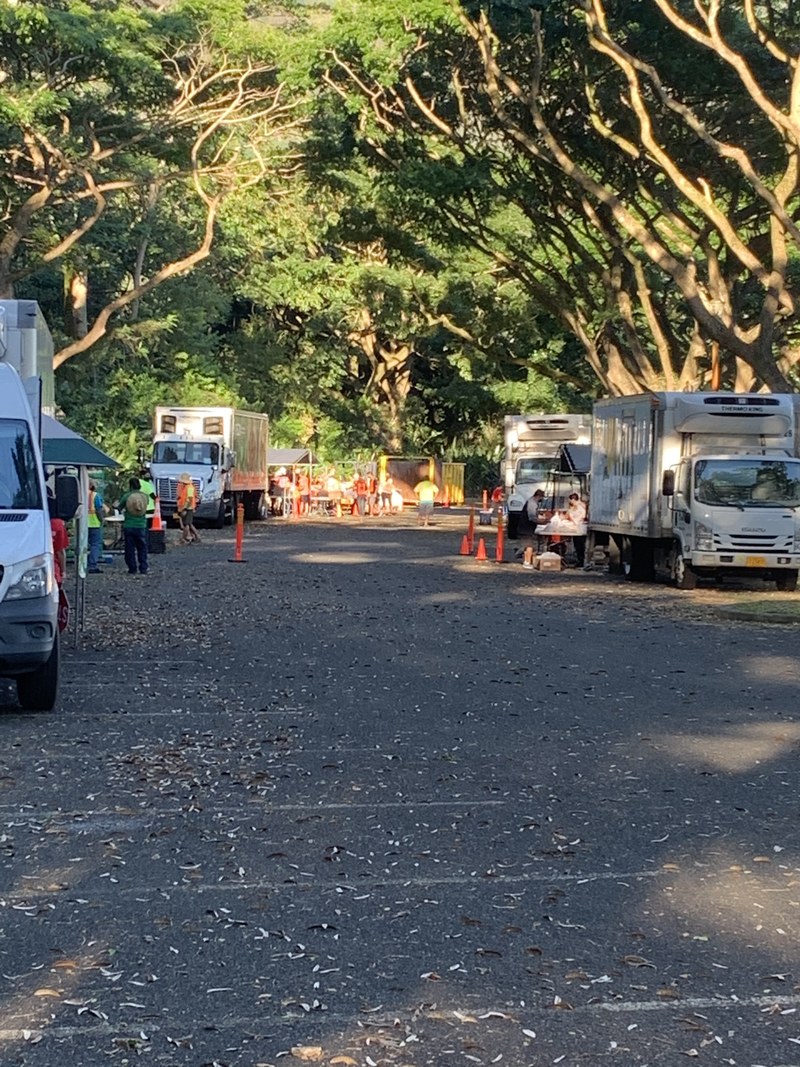